Nothing could stop Elena Prokhorova from winning the Raft Debate Monday night and the right to row her way off the island on which she and three colleagues were "shipwrecked."

Not a mini-Mardi Gras-style parade of large toy dinosaurs, part of a slickly organized campaign by Rowan Lockwood, professor of geology, who was defending the natural and computational sciences.

Not the storage-bin sized carton of props brought on stage by Assistant Professor of Government Marcus Holmes, defending social sciences.

Not even the precious smile and participation of Lockwood’s adorable nine-year-old daughter, Lyra, who probably had no idea the essential role science played in the ham sandwich she’d eaten for lunch that day.

A hyper, enthusiastic, overflow audience in Phi Beta Kappa Hall basked in the university’s annual exercise in which four professors from diverse disciplines are stranded on a desert island with the only mechanism of escape a raft large enough for one. In order to leave, they must argue the worth of their disciplines to society, which occurred under the watchful eye of “judge” Virginia Torczon, dean of graduate studies and research.

Prokhorova won an astonishingly close competition, judged by audience applause, primarily over Lockwood. Holmes and Vinroot were valiant, but fell behind early and never caught up.

Representing the humanities, Prokhorova, a Russian studies and film/media studies associate professor whose only prop was a mask of Vladimir Putin that she donned at opportune times, lit into the opposition with a good-natured attack.

“Look at the mess in which we live,” she began, noting that many of the world's most severe problems are man-made. “Social scientists and your models and scientists? Hello?

“I know the natural scientists will tell you that they do practical things. They do. But in 2016, one in 10 people on this planet lack drinking water. One in nine are undernourished or starving. We are wasteful. We live in technology overload. There are more cellphones in the world than running toilets. And all of those practical things have a flip side. In the immortal words of Jurassic Park, ‘Scientists were so preoccupied with whether they could, they didn’t stop to think if they should.’ We have stockpiles of bombs to exterminate life many times over. Practical? You betcha. In the Soviet Union where I grew up, we did not have debates. We were not even supposed to have opinions. But hard sciences? Yes, we were strong in those. And where is that civilization? Bye-bye.”

Lockwood related science to students’ everyday life, asking several about their early-morning routines. One – who sounded suspiciously like a “plant” – said he read the news on his phone.

“Your phone is key, your computer is key, to letting you read news,” Lockwood said. “A lot of where we get our information actually comes from science. We put the cellphones together, the circuits, all that good stuff.”

The water from their showers gets treated “using a whole slew of chemicals and physical scientific processes ... Hot showers? They involve physics and chemistry. If you think about it, hot showers are really brought to you by ...” 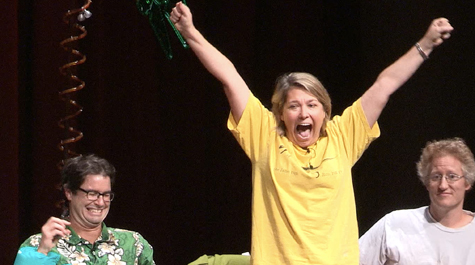 Lockwood: “Telephones are brought to you by ...”

The bread for Lyra’s ham sandwich: “The grain, wheat, was developed by scientists, agriculturists,” Lockwood said.

“What keeps you on a roller-coaster [at Busch Gardens] as you’re twisting around? Most of your spinning rides, most of your rollercoasters, all of that, are brought to you by ... “

Admitting that social sciences had won just two of the previous 14 Raft Debates, Holmes tried a bit of psychology, trying to make it seem as though he was conceding defeat by pulling out a lawn chair, umbrella drink and saying he might as well make himself comfortable on the island.

But then he opened a newspaper and began reading “headlines”: The 30th anniversary of President Ronald Reagan and former Russian leader Mikhail Gorbachev negotiating to end of the Cold War, “one of the success stories of social sciences,” he said.

“So it could be that I have something to say about the role of social science,” Holmes said, “and that it’s not as useless as one thinks.”

It was a nice try, but few were buying what Prokhorova jokingly called “a humongous bunch of baloney.”

“My opponents might say that humanities don’t teach transferable skills,” she continued. “Ugh, yeah. Well, humanities do teach skills, the most important ones being languages, cultural competence and close reading, seeing beyond the surface.

“Which brings me to Edward Snowden. He’s a smart man, a computer scientist – with zero cultural understanding. Out of all countries in the entire world, in his crusade against government abuse he chose Russia. Don’t let this happen to you. Save the humanities, please.”

A few minutes later, Prokhorova had the raft all to herself.