The William & Mary Global Film Festival (GFF) is celebrating its 10th anniversary with four days of films, special guests, workshops and receptions from Feb. 23-26. The festival will feature a diverse program of films and live events showcasing the work of international filmmakers, William & Mary faculty and emerging student talent from around the globe.

Highlighting the festival will be five Virginia premieres and eight international films from or about countries such as India, Japan, Russia and Pakistan. All screenings will take place at the Kimball Theatre, with workshops and receptions happening on the William & Mary campus or at Merchants Square.

"For the 10th anniversary we wanted to showcase all the William & Mary talent in the filmmaking industry among faculty, alumni and students," said Liz Sykes '06, co-producer of this year's GFF. "Wth the films and special guests we have lined up, we think we have achieved that."

Opening the festival is the featured film “The Tiger Hunter.” It is the story of Sami Malik, a young Indian who travels to 1970s America to become an engineer in order to impress his childhood crush and live up to the legacy of his father – a legendary tiger hunter – back home. To put it mildly, things don’t go as he planned.

Writer/director Lena Khan and producer Megha Kadakia will be present for a Q&A following the film, Feb. 23 at 8 p.m.

Friday’s feature film is “The Russian Woodpecker,” an award-winning documentary that examines the mind of an irradiated Ukranian artist on a quest to discover the “criminal” behind the Chernobyl nuclear disaster.

Director/producer/editor Chad Gracia will be present for a Q&A following the film’s showing at 8 p.m.

On Saturday at 8:30, the Virginia premiere of “Accidental Courtesy: Darryl Davis, Race & America” will be shown. Davis, an accomplished musician who has performed worldwide with rock legends Little Richard and Chuck Berry, uses his spare time to meet and befriend members of the Ku Klux Klan.

He and director Matt Ornstein will be present after the film to discuss the project and some of the remarkable results of Davis' unusual person-to-person campaign. 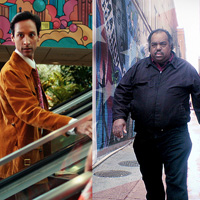 Among the films being shown involving William & Mary alumni is "Tower," produced by Megan Gilbride '00. Combining archival footage with rotoscopic animation, "Tower" is based entirely on first-person testimonies and is a suspenseful retelling of the tragic day a sniper climbed the iconic tower at the University of Texas and opened fire on the people below. It will be hosted by Sharon Zuber, professor of Film and Media Studies and English, and can be seen on Friday, Feb. 24, at 5:30 p.m.

The 2017 festival is sponsored by the Roy R. Charles Center for Academic Excellence, the Reves Center for International Studies, Canon, the Williamsburg Area Arts Commission and the Muscarelle Museum of Art. The complete schedule and passes are now available.