Academics – Sixteen of 19 total teams that were audited for their Graduation Success Rate (GSR) by the National Collegiate Athletics Association (NCAA) showed a 90-percent graduation rate, or better, in the latest figures (for the 2008 cohort). Last spring, 123 out of the 500 varsity members earned Provost Awards, which means they achieved a cumulative grade-point average of 3.50 or greater. The entire athletic department turned in a cumulative GPA of 3.06, with 17 of the 23 sports logging GPAs higher than 3.0.

Two programs deserve special recognition. The men's gymnastics team earned a team grade-point average of 3.458. That enabled it to defend the national academic team title that it won the year before with a record-breaking 3.622 team GPA. Tribe gymnasts have won three of the last four national academic titles. In addition, they have earned a standard-setting seven College Gymnastics Association national academic titles since the team award was established in 1991, while placing second six times. The gymnasts continue to hold the No. 1 position in total individual All-American Scholar-Athlete Awards.

The lacrosse program was once again selected a 2015 Intercollegiate Women's Lacrosse Coaching Association (IWLCA) Academic Honor Squad. W&M garnered the accolade for the second consecutive year after earning a cumulative grade point average of 3.0 or better. In addition to the team recognition, seven members of the team were selected to the 2015 IWLCA Academic Honor Roll – Ellen Shaffrey, Amanda Johnson, Allison Henry, Sarah Gunter, Michelle Goss, Kelly Martins and Trish Gorman. It is the second straight season in which seven Tribe student-athletes were honored. 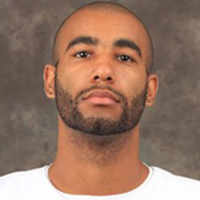 Free safety DeAndre Houston-Carson was selected as a finalist for the Dudley Award, which honors the top Division I player in the state of Virginia, and was invited to the prestigious Senior Bowl, which features the top professional prospects from the college ranks ... Three-time first-team All-CAA linebacker Luke Rhodes will play in the 2016 NFL Players Association Collegiate Bowl on Jan. 23 in California.

﻿Men’s basketball – Tony Shaver’s team reached the CAA title game in Baltimore for the second consecutive year, but lost to Northeastern. The Tribe, winner of 20 games, was invited to the National Invitation Tournament, falling at Tulsa, 70-67 ... Marcus Thornton finished his career as W&M’s all-time leading scorer, was named mid-major player of the year, and was drafted by the Boston Celtics ... Prior to the ’15-’16 season, Terry Tarpey was chosen preseason first-team All CAA. Omar Prewitt was chosen to the second team. 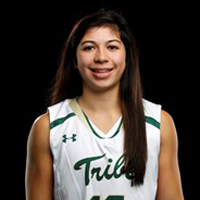 ﻿Women’s basketball – The Tribe won 15 games, fourth-most in school history, and earned a spot in the Women’s Basketball Invitational – its first-ever postseason appearance as a Division I participant. Playing at No. 2 seed Xavier, W&M fell, 57-56 ... Prior to the ’15-’16 season, junior Marlena Tremba was chosen second-team preseason All CAA.

﻿Baseball – The Tribe finished with a 22-30 record, but catcher Ryan Hissey was drafted by the Toronto Blue Jays in the 14th round ... Construction on the Plumeri indoor practice facility is well underway. It will overlook the field, run up the third base line and will provide the program with over 5,700 square feet of crucial “all-weather” practice space. Currently, the program has no comparable practice or training facility for inclement weather.

﻿Cross country – Sophomore Regan Rome earned her first All-American honors this fall, finishing 25th at the NCAA Championships … She and senior Emily Stites shared CAA Athlete of the Year honors, after Stites won the conference title by more than 10 seconds over Rome and both broke the CAA record … Men’s cross country won their 16th CAA title in a row, the nation’s second-longest active streak, and the fifth-longest winning streak in NCAA history.

﻿Field hockey – The Tribe finished the fall with a 7-12 record, despite missing at least one starter in each of the last 13 matches. Senior Pippin Saunders was named first-team All CAA and All Region for the third year in a row. She finished her career second all-time in assists with 22, fifth in points with 98, and sixth in goals with 38. Saunders was the first player since 1987-90 to lead W&M in scoring all four years.  Sophomore Booter Ellis ranked among the nation’s top-10 players with five defensive saves and was named second-team All CAA.

﻿Men’s golf – Last spring, the men's team tied for second at the CAA championships. Leading the way was Alex Hicks, who was named to the All-CAA first team for a record-setting third year in a row ... In the fall, the team wrapped up the season with a fifth-place performance at the Georgetown Intercollegiate, scoring 600 (+32) over the two-day tournament to tie Richmond. 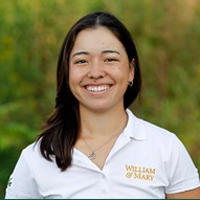 ﻿Women’s golf – Representing the Tribe on the All-CAA first team during the spring season was junior Alessandra Liu, who became W&M's first female player to make the top squad since 2010. Liu broke the school record for the best season average by nearly three-quarters of a stroke, averaging 75.0 strokes per round. Liu brought her fall season to a close by winning the Pinehurst Challenge by three strokes at 206 (-10). That was the lowest collegiate score ever at Pinehurst, and Liu's second round 65 (-7) was also the best-ever in the tournament's 19-year history. Liu also set school records for best round (65, -7), best 36-holes (136, -8), and best 54-holes (206, -10), and her round of 65 is tied for the fourth-best in the NCAA this season.  She currently ranks ninth in the country with a 70.75 average according to Golfstat.com.

﻿Men’s gymnastics – The team finished third at both the USA Gymnastics Collegiate Championships and the ECAC Championships. Michael Deitz not only won the national high bar title but was also designated as the Senior Athlete of the Year at the USA Gymnastics Collegiate Championships. Aria Sabbagh was second in the all-around, and Jason Wang finished third on pommel horse. Peter Ten Eyck (fourth on pommel horse) and Jeremiah McReynolds (sixth on rings) joined Sabbagh and Wang as USAG Collegiate All Americans. The team ended the season ranked 14th in the NCAA's final statistics with seven gymnasts advancing to compete in the NCAA Championship qualifying rounds. Dietz was honored by being selected to give the student-athlete speech at the NCAA Banquet.

﻿Women’s gymnastics – William & Mary earned its second consecutive conference title, and three members earned spots in the NCAA Auburn Regional in April. Graduate student Larson Lasek and junior Brittany Stover competed as all-arounders, while senior Maggie Lundeen qualified on floor ... Honored as the ECAC athlete of the year for the second consecutive season, Brittany Stover was the No. 2 individual all-around qualifier in the region with a RQS of 39.110. 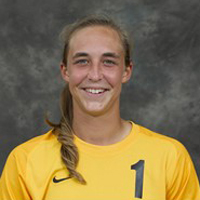 ﻿Soccer – For the 25th time in program history, the women’s team moved into the NCAA Women's Soccer College Cup. The Tribe earned one of the 33 at-large bids, defeated Central Florida in the first round before losing to Florida in the next round ... Senior goalie Caroline Casey reeled in national accolades for her outstanding season. She was named a National Soccer Coaches Association of America first-team All-American. Casey is the Tribe’s 31st player to be named an NSCAA All-American, and the 12th first-team selection ... The men’s team had six players earn All-CAA awards, including Marcel Berry. He was named the conference rookie of the year. The team also trounced Elon, ranked 10th in the nation, 4-1.

﻿Swimming – Last spring, the men's and women's teams landed among the nation's top teams in the final mid-major rankings of the year put out by CollegeSwimming.com. The Tribe men were ranked 15th overall, and the women were 16th, in the tally of programs that don't belong in the top, "BCS money" conferences ... In CAA action, the men finished 7-2 in the regular season, and won a first-ever CAA championship with 784.5 points, the second-highest score in conference history. The Tribe won 10 event titles, including a record four relays, and Jeremiah O'Donnell was named the swimmer of the championships after sweeping the 200 IM, 400 IM, 200 breast and the 800 free relay with four conference records ... The women finished third, and their 585 points was the most since winning the conference in 2007. W&M won both 200 relays, and Sophie Rittenhouse took her first individual gold in the 100 back. 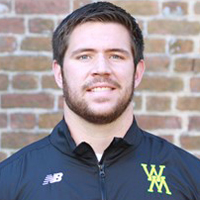 ﻿Track & Field – The men’s team opened the spring 2015-16 season at the CNU Holiday Open by breaking two school records and recording an NCAA-best performance. The Tribe scored 138 points to rank second out of five Division I teams, behind only Norfolk State (186 points), despite having with a fraction of the Spartans’ roster. Redshirt-senior Brian Waterfield came in thinking he might break 20m in the weight throw. Waterfield's first throw went 21.05m, and then his second effort nearly left the landing sector to record an official distance of 21.43m (70-3.75), more than five feet past the school record he set just last year. That mark is also about 1.5 inches further than what it took to get invited to the NCAA Championships last winter, and is currently the best throw in the nation. No Tribe men's thrower has ever reached the national meet indoors. 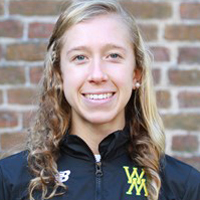 Women’s Track & Field: Emily Stites finished third in the nation last spring in the 10,000m at the NCAA Championships. She was named the CAA’s athlete and scholar-athlete of the year, and won a program-record seventh All-American honor ... The team opened this spring season by winning the CNU Holiday Open, taking five events. The Tribe broke a school record and qualified three women to the ECAC Championships in March. Leia Mistowski shattered the W&M record in the weight throw with a winning toss of 16.79m (55-1). That qualified her for the ECACs, and was 16 inches better than the previous record. Rochelle Evans won the shot put in an ECAC-qualifying 13.55m (44-5.5), and took second in the weight with a lifetime-best 15.65m (51-4.25). Rounding out the ECAC bids was Molly Breidenbaugh, who capitalized on her strong cross-country season to win the 3,000m race in 9:47.01. Other winners included Meghan Mulroy, who took the 5,000m in 19:20.09, and Jacqueline Meeks, who won the pole vault with her clearance at 3.50m (11-5.75).

﻿Tennis – Last spring, the Tribe men captured the 2015 CAA championship by beating College of Charleston, 4-1. Senior Will Juggins left the program fourth all-time in wins. In the NCAA tournament, the team lost to North Carolina in the first round ... For the fourth time in the last five seasons, the CAA’s male scholar-athlete of the year was a William & Mary student-athlete. Juggins became the seventh Tribe athlete to win, and the third men's tennis player ... For the 20th time in program history, the women's team earned a spot in the NCAA Championship after winning its 23rd CAA title. Leeza Nemchinov fell in the opening match to Southern California's Sabrina Santamari ... The doubles tandem of Jeltje Loomans and Nemchinov closed out one of the best doubles careers in program history by losing to No. 9 UCLA, 6-3, 5-7, 5-7.

﻿Volleyball – The team made the CAA tournament for the third time in four years. Dessi Koleva finished her career as just the third player in school history with 1,000-plus kills and 1,000-plus digs. For the third year in a row, she was the only player in the CAA to rank top 10 in both categories. She also threw eight aces in the final two games to jump into the top 10 in service aces. Carolyn Albright was a defensive wizard, becoming the fourth player in W&M history with 400-plus blocks, and also had a career-best year in kills, points, digs and hitting percentage.