Staff and curators at the Muscarelle Museum of Art at William & Mary Thursday were putting the finishing touches on the gallery before the public opening of “Leonardo Da Vinci and the Idea of Beauty.”

The show, the first exhibition devoted to Leonardo’s fascination with the beautiful and the ugly, opens to the public on Saturday, Feb. 21, and will remain on view through April 5. The night before the opening, at 6 p.m. on Friday, Feb. 20, John Spike, assistant director and chief curator, will deliver a free lecture on Leonardo’s fascination with natural beauty and how his style contrasted Michelangelo’s.

The exhibit features more than 20 drawings by Leonardo as well as his complete Codex on the Flight of Birds.

"You can go nowhere in the world today and see more than one or two drawings by Leonardo da Vinci,” Muscarelle Director and CEO Aaron De Groft said. “[That would] probably be an exhibition like at the Royal Academy or the Uffizi or the Louvre, where you have several hundred Renaissance drawings and you might get one or two of Leonardo’s. Today, you're going to see over 20 works by Leonardo da Vinci, with another eight comparing Michelangelo in a theme of an exhibition that's never been done before."

The show also represents the first time that Leonardo’s newly discovered self-portrait at 53 has been exhibited in the United States.

“He drew [it] in red chalk, and then he wrote over top of it,” De Groft said. “The fact that the writing has been taken away and the image of his face is being shown for the first time makes this exhibition incomparable."

Also highlighted is Leonardo’s “Study for the Head of an Angel for the Madonna of the Rocks,” which art historian Sir Kenneth Clark considered “one of the most beautiful drawings in the world.”

The museum’s decision to compare Leonardo to Michelangelo is, in a sense, an homage to Leonardo’s own philosophy, which emphasized understanding qualities by virtue of their contrasts, Spike said. 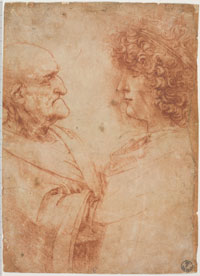 Prominently displayed is Leonardo’s “An Old Man and a Youth in Facing Profile,” which demonstrates the point. While the youth might have beauty, he seems dreamily focused inward, almost vapid, while the old man exudes a solid presence and an inner strength borne from experience.

“[Leonardo] had a belief about opposites, that it reinforced their strengths when contrasted together,” Spike explained. “He said comparison was the key to seeing a quality in its full force.”

In philosophies, Leonardo and Michelangelo were as diametrically opposed as the old man and the youth. Leonardo believed that understanding nature – how things worked – provided insight into the nature of God, while Michelangelo consigned to the idea that the world was merely a “shabby reflection of the divine idea.”

“Michelangelo hopes to give us glimpses of that beauty, and he thinks that he, better than anyone else who ever was – this is the shyness of Michelangelo – knows what God was thinking. There's where he's going with his works. It's not like Leonardo's trust and faith in nature."

Leonardo’s drawings were loaned to the Muscarelle by the Uffizi Gallery Museum in Florence and the Biblioteca Reale di Torino, while Michelangelo’s were lent from Casa Buonarroti in Florence. Both loans continue to build on the networks De Groft and Spike have built abroad over many years, which have allowed the Muscarelle to host ever higher-profile exhibitions.

The Leonardo show is widely recognized as the most important on Leonardo in more than two decades, after the last big exhibition of Leonardo’s work, at the Metropolitan Museum of Art, in New York, De Groft said.

“It makes us proud to bring something like this to our community and to our College," he said.

Muscarelle’s own Renaissance began just before its 25th anniversary, when in 2007 it exhibited works from the Medici collections. The next year it featured 500 years of landscape paintings from the Uffizi Gallery Museum, kicking off a national tour of those works.

As happened with the Michelangelo exhibition, the Leonardo works will be shown at the Museum of Fine Arts, Boston, after the Muscarelle show closes. Boston will be the second and only venue for the exhibition.