To Virginia Sen. Creigh Deeds, mental illness is the Boo Radley of our time.

The treatment of the elusive To Kill a Mockingbird character “is a metaphor for the way we as a society deal with mental health,” he told a group of about 65 students assembled in William & Mary’s Tucker Theatre Monday night. “It's somebody else's problem. It’s not ours. It's not on the front page.

“But I'm here to tell you, it is on the front page. It affects one in four families, at least, and probably one in four, or one in five people … So this past legislative session, I decided to do something I've never done before: To make sure it's at the top of my agenda. I wanted to do some things to affect the way the system immediately failed me, failed my family, last fall.” 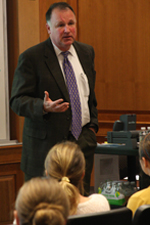 Last year, Gus Deeds, a former William & Mary student who was not enrolled at the time, attacked his father before taking his own life. Creigh Deeds has since become an advocate for mental health initiatives.

His talk, “Politics and Mental Health,” which focused on past and future legislative efforts in the state, kicked off a week of campus events honoring Mental Health Awareness Week.

In many ways, Creigh Deeds’ goal mirrors that of the student organizations sponsoring the event: to fundamentally change the conversation surrounding issues of mental health in the absence of an immediate crisis.

“There are desperate things that occur in our society, and we try to face them,” he said. “And then the urgency passes, and we're on to the next crisis.

“This year, while I was sitting in the General Assembly session every day, with scars much darker than they are now, and with eyes blood-red from crying, it was impossible for legislation not to pass. People wanted to respond. The hard work is going to be going forward; the hard work is going to be making sure we maintain the urgency to address our inadequacies in mental health care.”

His hopes are shared by the Student Assembly, Health Outreach Peer Educators (or HOPE), Active Minds, the National Alliance on Mental Illness and Alma Mater Productions, which are sponsoring the week of events.

“It's important that we all recognize that mental illness is something that affects everyone in some capacity,” said Kendall Lorenzen ’15, Student Assembly vice president. “By really making it a point of discussion for the entire campus, people will be able to see that no one is ever really alone in anything they are going through, and that this whole community can be there to support them and really work with them through it.”

Events run through Saturday and include:

The evenings are also supplemented by smaller campus events throughout the week, Lorenzen said, and are part of an ongoing focus by Student Assembly on mental health and available resources, including the Counseling Center.

For his part, Deeds offered some advice to the students Monday night. His “first rule,” he said, was to focus on the issues you can control. “You are in a high-stress environment. You are under tremendous pressure to preform, to get those grades, to succeed. This is a tough, tough time.”

Take care of yourself first and then the people around you, he advised gently.

“You are your brother’s keeper,” he said.