The event, which honors the life and legacy of King, will be held from 6:30 p.m. to 8 p.m. in the Sadler Center’s Commonwealth Auditorium. Sponsored by the Center for Student Diversity, the talk is free and open to the public.

Hill, distinguished professor of African American Studies at Morehouse College in Atlanta, is the host of HuffPost Live and BET News, as well as a political contributor on CNN. He is former host of the nationally syndicated television show “Our World With Black Enterprise” and a former contributor to the Fox News Channel.

“We are excited to welcome Dr. Hill to William & Mary,” said Vernon Hurte, senior associate dean of students and director of the Center for Student Diversity. “The tragic events in Ferguson and New York City has pushed us, once again, to engage in a meaningful and honest discussion about race in America. I know that Dr. Hill’s insight will inspire and challenge us as we further this important discussion here at William & Mary.”

Among other things, Hill reports and comments on American race and criminal justice issues. He has also founded or served with a number of organizations dedicated to social justice, including working with the ACLU’s Criminal Law Reform Project on drug informant policy. 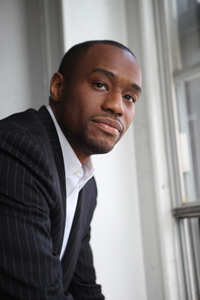 In a 2012 interview with Ebony, Hill said, “I worry that we're still holding onto an antiquated notion of what leadership is and what it should look like. We may need charisma in some instances, but we also need people on the ground doing the work…

“We need to reimagine leadership that is more democratic, more horizontal than vertical. We need to have more women present in leadership, more gays and lesbians in leadership. Leadership can no longer only come from the middle class, but also from the working poor and poor. The next wave of leadership also has to be intergenerational.”

In 2011, Ebony named him one of America’s 100 most influential black leaders and in 2014 one of its “Power 100,” or most inspiring African Americans. He has received awards from the National Association of Black Journalists, the International Academy of Digital Arts and Sciences, and the lesbian, gay, bisexual and transgender media advocacy group, GLAAD.

Trained as an anthropologist of education, Hill holds a doctoral degree with distinction from the University of Pennsylvania. His research focuses on intersections between culture, politics and education. He has published two books: The Classroom and the Cell: Conversations on Black life in America (2011, co-authored with Mumia Abu Jamal); and Beats, Rhymes, and Classroom Life: Hip-Hop Pedagogy and the Politics of Identity (2009). He has also published two edited books: Schooling Hip-Hop: New Directions in Hip-Hop Based Education (2013) and Media, Learning, and Sites of Possibility (2007).

Hill’s talk represents the culmination of a month of events at William & Mary dedicated to the legacy and memory of King. Included in the schedule:

“From Lemon to MLK and Beyond: The Journey of Understanding W&M’s History with Race,” 10 a.m. to 4:30 p.m. on Sunday, Jan. 18. Branch Out Regional and Lemon Project directors explore the university’s relationship with racism, slavery and Jim Crow through a full day that includes a presentation, a tour, interviews transcriptions and a talk.  Open to students, email registration for each segment is required. Sponsored by the Office of Community Engagement.

“MLK Social Justice and Service Program,” 9:30 a.m. to 6:30 p.m. on Monday, Jan. 19. Students can focus on one of four social issues (hunger, housing and elderly or youth services), volunteering with two different nonprofits and learning about King’s legacy of social justice and service. Lunch and dinner will be provided at the day-long event, which is open to students. Registration is required. Sponsored by the Office of Community Engagement.

“Confronting Racism at William & Mary: A Restorative Justice Approach,” 4 p.m. to 6 p.m. on Wednesday, Jan. 21, in the Sadler Center. Jeree (Harris) Thomas ’08, attorney for the JustChildren Program, Virginia’s largest children’s law program, joins the university for a workshop on confronting externalized and institutionalized racism at W&M. Registration is required for the event, which is sponsored by W&M Scholars Undergraduate Research Experience, or WMSURE.

“Bending the Arc: Moving Racial Justice Forward,” 10 a.m. to 3:30 p.m. on Saturday, Jan. 24. A day-long summit for students hosted in the Sadler Center by the William & Mary Center for Student Diversity. Discussions and workshops will explore ways to move from this catalytic moment in the struggle for racial justice to a movement that can achieve lasting change. Registration required.