WASHINGTON, D.C. -- A short elevator ride and about 400 years separate the Gutenberg Bible from Fletcher Souba’s work at the research arm of Congress and the largest library in the world.

Souba ‘15, is one of 11 William & Mary students who served as interns at the Library of Congress this summer, stints that ended on Aug. 13. It was the continuation of a program between the Library and colleges and universities that has served both parties well.

Souba sifted through a couple hundred newspapers from 1861 to 1865 that chronicled the days leading to the end of the Civil War. He evaluated their worthiness to be added to an existing collection, rehoused the additions in preservation-safe folders and entered descriptive information in a database.

He also selected issues he considered historically important for an exhibit.

{{youtube:medium|M9b83RV55V4, Souba '15 recounts his experience at the Library of Congress.}}

“At William & Mary, with any paper I write or test I take, details are very important,” Souba said. “When working with these documents, they may seem very honed in on one specific area or different battle at the time. But often they are very broad. I’ve been better able to analyze the authors and journalists because of the things I’ve experienced at William & Mary.”

Other W&M students and their summer projects were equally interesting. Michelle Biwer ’14 helped redesign the 6,000-book collection of the Young Readers Center. Cassidy Fazio ‘15 and Shannon Fineran ’15 edited the Handbook for Latin American Studies. Abigail Kahler ’16 assisted the Collection Access, Loan & Management Division (CALM) in improving the physical condition of fragile and brittle books and pamphlets. Keabra Opong Brown ’16 and Amanda Wells ’14, also assigned to CALM, were also tasked with finding and processing items belonging to the Carvalho Monteiro Library, which sounds a bit like searching for a needle in a haystack.

“Monteiro was a Portuguese bibliophile; (he was) very wealthy, collected extensively in a wide number of subjects and had a massive collection in his estate in Portugal,” Wells said. “His descendants sold the collection through a book seller to the Library of Congress in the 1920s and the books from that collection were dispersed throughout the Library without being recorded as parts of that collection.

“Our job (was) to rediscover essentially those books, alter the catalog record and make sure there is note of them … There are around 30,000 items in that collection, and we’ve found around 6,000 items.”

W&M students earned the internships by applying through Swem Library and Jay Gaidmore, director of the Special Collections Research Center. Swem Library assists the selectees by providing scholarships to those who need assistance with housing and travel expenses. Nine students were awarded scholarships this year, totaling nearly $4,000. In addition, the Roy S. Charles Center for Academic Excellence provided $3,500 in funding that was shared among five Library interns, including Souba.

“The Library of Congress welcomes interns from multiple universities and colleges every summer,” said Dawn Stitzel, who manages the program and is the head of the Library of Congress Knowledge Navigators. “We’re so grateful for their contributions. We try to round out their experiences by offering discussions and tours that they can optionally participate in. And we’re very appreciative of the contributions that William & Mary students have made to advancing the many projects here at the Library.”

Souba chose to exhibit four newspaper issues from 1863 – all from the North, where 90 percent of the printing presses were located.

The first paper, a May 1863 edition of the Philadelphia Inquirer, featured a large map of troop movements, a common feature of the day. Dated though the information was, those maps enabled the families of soldiers to gain some idea of their relatives’ whereabouts.

The second, from the New York Tribune of August 1863, is also noteworthy because of its map and what it shows regarding the changing fortunes of the South. Part of the map is grey, symbolic of Confederate land holdings in 1861. Part of the map is black, representing a Confederacy cut in half as the Union victory in Vicksburg gave the North control of the Mississippi River.

The third, from the Weekly Herald of December 1863, was filed from the battlefield at Chattanooga. The Union victory there, Souba said, was vital in clearing the way for Gen. William Tecumseh Sherman’s infamous “March to the Sea.” With the help of Gen. Ulysses Grant, the Union won surprising victories at Chattanooga strongholds known as Missionary Ridge and Lookout Mountain, the latter fought in dense fog and better known as “The Battle Within the Clouds.”

Finally, Souba chose the New York Herald from March 1865. Not only does the paper depict Sherman’s march, under the headline “The Last Swath of Sherman,” but journalist F.G. Shank wrote of his conversations with slaves about to be freed, unusual for the time.

The War on Wallpaper

One item Souba came across very early in his internship is a famous Civil War artifact, one that comes with a bit of controversy.

It is the Vicksburg Daily Citizen, dated July 2, 1863. The Union Army had laid siege to the city, and J.M. Swords, editor and publisher of the town’s newspaper, had fled, leaving that day’s edition of the paper on his printing press.

Two things make it noteworthy: The first is that, because of a severe shortage of newsprint paper, the edition is printed on the back of wallpaper. The second is that Union soldiers added their own text to the bottom of the page, gloating and leaving no doubt that Vicksburg was lost to the Confederacy. 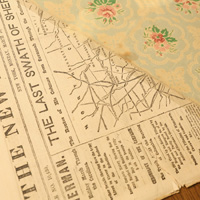 “Two days bring about great changes,” it begins. “The banner of the Union floats over Vicksburg. Gen. Grant has ‘caught the rabbit:’ he has dined in Vicksburg, and he did bring his dinner with him. The ‘Citizen’ lives to see it … This is the last wall-paper edition, and is, excepting this note, from the types as we found them. It will be valuable hereafter as a curiosity.”

Vicksburg was surrendered on July 4, the hope among townspeople being that Grant would show pity on them because the surrender occurred on Independence Day.

Souba, an international relations and economics major from Massachusetts, said he had a “personal interest” in the Civil War prior to applying for the internship. And while the internship hasn’t made him alter his career goals, leaving modernity behind for several weeks has provided him with great satisfaction.

“The coolest part of being here has actually been working with the newspapers,” he said. “I like that so much more than working with microfilm or being on a computer all day.”