William & Mary's Elaina Balouris '14 ran the race of her life Thursday night at the NCAA Championships, finishing a best-ever fifth at 10,000m to finish her career as a first-team All-American.

Teammate Emily Stites, a sophomore, also ran very well in the fastest-ever women's 10,000m championship, finishing in 10th place and taking a spot on the All-America second team. The two top-10 finishes gave W&M four team points, good for tie at 21st overall out of 34 teams that have scored so far at the national meet.

Early in the race, it was the Tribe pushing the pace with Balouris out in front for much of the first eight laps, taking the field through the mile at 5:17. With just about 3,000m to go, Stites jumped out in front for a stretch, crossing the 3k in about 10 minutes.

From there, the Green and Gold let some of their competitors do the work up front, settling back into the pack as the 5,000m was passed in 16:39 and 7500m in about 24:30.  With about a mile to go, Balouris charged into the lead-pack of four, including retaking the lead briefly, and remained in contact with the top three until the bell.

In the final tally, Balouris' fifth-place finish came in a lifetime-best performance of 32:46.57, breaking the 33-minute barrier for the first time and qualifying for the USAT&F National Championships in two weeks. She earned her sixth career All-American honor, most-ever for a Tribe women's runner, and has now set a lifetime-best in six of her eight races this spring. That total includes all three of her 10,000m races.

Balouris is just the fifth W&M athlete ever to earn All-America honors in all three seasons of a single academic year, and she also improved her predicted finish by four spots.  She improved her finish at the NCAA Championships every year, from 19th as a sophomore to 10th last year, and to fifth now as a senior. 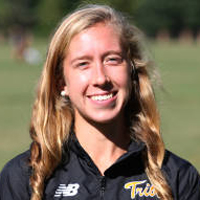 This was the second year in a row that Stites has finished 10th in her race at the outdoor NCAA meet, after she was also 10th in the 5,000m last year a freshman. She finished the year with two more All-America accolades (she was sixth at the indoor 5,000m championships), and now has four in her career after just two years. She is also qualified for the USAT&F National Championships, where she could bid to add a senior national title to the two junior crowns she earned in 2013.

W&M's four points scored in the team standings makes this the seventh year in school history that the Tribe has earned a spot in the national outdoor standings. The Tribe previously placed in 1981, 1982, 1992, 1993, 1994 and 2008. The finish also gives W&M an appearance in the final national standings in all three seasons (cross country, indoor track and field, outdoor track and field) for the first time.