A program from a 1984 “Evening at Mount Vernon,” honoring Thomas Graves revealed that the former William & Mary president brought an air of casual “comfort” to the College, once roaming the campus wearing a “Derby Day” t-shirt, a startling change from his trademark bow ties. He regularly attended fraternity parties, and made the President’s House that he and wife, Zoë, refurbished upon their arrival a popular spot for meetings and social events.

Graves was the champion of many things at the College, including what would become the Muscarelle Museum of Art, the School of Business Administration and the Marshall-Wythe School of Law. He was also the friend and confidante of students, faculty, staff and alumni. 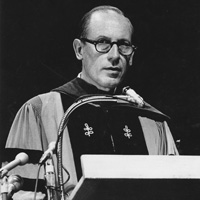 “Happy 90th birthday, President Graves,” said President Taylor Reveley, William & Mary’s 27th president.  “Your years leading the College were momentous. The contributions you and Zoë made to the progress of William & Mary will not be forgotten.”

Graves, who came to the College in 1971 from his post as associate dean of faculty of Harvard’s graduate school of business, served as W&M’s president for 14 years. During his tenure, he welcomed such celebrities to campus as Presidents Gerald Ford and Jimmy Carter, entertainment legend Pearl Bailey and Prince Charles, among others.

In the 1970s, a visitor remarked to Graves that there was a Georgia O’Keeffe painting hanging, unprotected, on a wall on campus. This led him to wonder what other treasures were scattered across campus. To find out, he enlisted the aid of Miles Chappell of the Art History Department to conduct a survey to determine what artworks the College owned. The survey revealed that over nearly 300 years, William & Mary had amassed a sizeable collection of art and established the need for a museum to preserve and protect them.

In 1983, following a major gift from benefactor Joseph L. Muscarelle ’27 and his wife, Margaret, the Muscarelle Museum of Art was opened.