The United Nations’ recent World Interfaith Harmony Week provided an ideal opportunity for William & Mary’s I-Faith organization to get back to its roots by hosting a one-day conference entitled “The Importance of Multi-Faith Understanding and the Dangers of Religious Ignorance.”

The Feb. 3 event was co-sponsored by Catholic Campus Ministries and the Wesley Foundation.

{{youtube:medium|gOD49X8jz58, Col. Lawrence Wilkerson addresses the interfaith conference at William & Mary on Feb. 3.}}
“Multi-faith understanding and dialogue is the reason that I-Faith exists,” said Christian Science campus minister Leslie Revilock. “We usually hold an interfaith dialogue each year and this year it came to us to do something a little different and more academic in conjunction with UN World Interfaith Harmony Week.”

Recognizing the first week of February as World Interfaith Harmony Week was officially and unanimously adopted by the United Nations General Assembly on Oct. 20, 2010. Building on the UN Alliance of Civilizations, the week provides a platform for promoting peace and non-violence, and eliminating intolerance and discrimination based on religion or belief.

Meanwhile, W&M’s I-Faith is dedicated to enriching religious understanding and building a world more tolerant and celebratory of the diverse belief systems within it. Student members worked for months to put together a day, inviting the W&M community and the general public to come together to discuss and explore the benefits of multi-faith understanding, and the drawbacks of religious ignorance and intolerance.

“I’ve been a part of I-Faith since my freshman year,” said Jess Yon ‘13. “We felt like there was a need to explore and examine why interfaith understanding is relevant and necessary, so we decided to put together a conference . . . where students and community members could start to examine these issues more critically and from an interdisciplinary lens.” 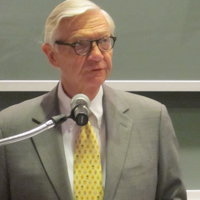 "Our goal was to promote awareness of the importance of understanding diverse religion in order to navigate our increasingly global society,” said Sonn.  “We invited speakers who addressed that issue from a variety of perspectives, including the importance of distinguishing between political and religious conflicts, and learning how to promote interfaith understanding.”

Col. Lawrence Wilkerson, distinguished adjunct professor of government and public policy at William & Mary and former Chief of Staff to Secretary of State Colin Powell (2002-2005), addressed the need to understand religion as a tool of diplomacy and statecraft in his lecture, “Consequence of NOT Studying Religion’s Role in Global Affairs.”

Shireen Hunter, visiting professor and lecturer in political science at Georgetown University, then spoke on “International Savvy: The Importance of Studying Religions in Understanding Global Affairs” and warned the audience not to exaggerate the role of religion in a nation or to base all assumptions on religion.

She reminded participants that the complexities of a society and a political entity are based on two components: the value and ideals of the society, and the interests, means or economic well-being of the society.

After lunch, Rabbi Lawrence Forman of Ohef Sholom Temple and the founder of the Institute for Jewish Studies and Interfaith Understanding at Old Dominion University delivered a lecture on “Interfaith Dialogue… A Way toward Healing and Reconciliation.”

He highlighted the great debts that religions owe each other, and stressed that the knowledge of any religion should lead to compassion rather than hatred. He reminded audience members that thinking, speaking and differing peacefully should inspire our ethical actions.

For participant Rebecca Schectman ’16, the conference brought to mind both global and personal connections.

“Intolerance in general is an important topic to address in a world that is increasingly connected but also increasingly polarized,” she said. “As a kid growing up in an interfaith family, I know religious intolerance is a thing that can be worked through when people give each other a chance.”

Abdullah Noor ’13 was one of I-Faith’s five founding members, along with Sarah Mellman '12, Tom Flahertry ’12, Jess Yon '13, and Yon’s classmate, the late Whitney Mayer. Noor was particularly proud of the success of the conference.

In his three years of doing interfaith work on campus, Noor noticed that W&M had many Christian organizations but few minority religious organizations.

“On top of that, the organizations usually have strong commitments to, and spend a lot of time with, their own communities,” said Noor. “Rarely, and with only a few exceptions, do they interact with the ‘other.’ I found it incredibly important to spread why interfaith work is important and why people should engage in understanding religions.

“I think the conference did a great job in achieving its goal.”

The conference was supported by the W&M Center for Student Diversity, the Office of Diversity and Equal Opportunity, the Roy R. Charles Center, the Reves Center for International Studies, the William & Mary Class of 2013, and W&M Balfour-Hillel. Lunch was catered by local restaurant Nawab.