Mike Tierney, co-director of the Institute for the Theory & Practice of International Relations (ITPIR) at William & Mary, joined co-author Chris Marcoux of DePauw University in presenting their paper, “Environmental and Climate Finance in a New World” to a group of scholars, aid practitioners and policymakers in Stockholm, Sweden. The program was streamed live on the web on June 4 and will be edited into a program to be broadcast later this month on Swedish national educational TV.

The conference was co-sponsored by the United Nations University World Institute for Development Economics Research (UNU-WIDER), the Danish International Development Agency (DANIDA) and the Swedish International Development Cooperation Agency (SIDA) as part of UNU’s initiative to support Research and Communication on Foreign Aid (ReCom). Finn Tarp of UNU-Wider opened the discussion by saying, “When you look to international debate about these issues … you have to bring together a large global network of informed people from different perspectives and that’s what we are trying to do. Consequently, some 225 studies will be available at the end of this year.”

Marcoux, who was a Mellon Postdoctoral Fellow at W&M, collaborated with Tierney and fellow AidData researchers  Brad Parks, AidData executive director; Christian Peratsakis of Development Gateway; and Timmons Roberts of Brown University. Updating their previous research published in the book "Greening Aid," the authors found that over the past 30 years foreign aid has become less environmentally damaging. Within the category of aid designed to benefit the environment, donors have increasingly chosen to allocate aid to address global environmental challenges, rather than environmental problems that are localized in developing countries. Further, despite the fact that numerous new multilateral institutions have been created to coordinate donor funding to address climate change, donor governments are choosing to allocate aid bilaterally through their own aid agencies rather than working through these multilateral channels. 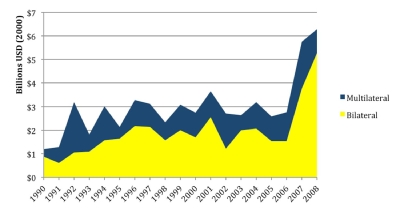 Following the presentation, Tierney explained: “Researchers  at the conference were skeptical of the way that donors have tracked climate finance and environmental aid. So, they seemed to like the fact that we had our own independent categorization system that we could apply consistently across time and across donors. This is necessary if you want to create any kind of credible baseline against which to assess donor promises for new and additional aid to address climate change. Recipient country governments are very nervous about "re-labeling" of development finance as climate finance. Our categorization scheme would make it more difficult to engage in such substitution activities."

Overall Tierney concluded, "We are very encouraged by the work being sponsored under the leadership of the United Nations University.  They encouraged us to update our work on environmental aid and put us directly in touch with a network of researchers in Africa who can put our data to use and who can serve as research collaborators.”