General Tso Chicken and jellybeans. Duke-North Carolina college basketball and the indefatigable Spartan Army. What do these have to do with a world record in rowing? 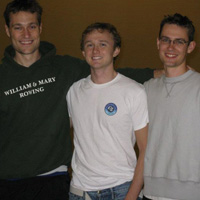 Wallin was joined by Ryan Fliss ’14 as well as varsity men’s rowing coach Nathan Walker, but neither fared nearly as well.

“Once I graduated I started getting into longer distances,” Wallin said. “Two years ago, I did this endurance race outside of Philadelphia, went 20 miles, and really liked it. So I kept training for it.”

Wallin was supported by an entourage that included his mother, Sheila, and sister, Kerry, as well as past and present members of the rowing club. They kept him engaged in conversation, fetched something for him to drink about every 10 minutes, and monitored what he watched on television.

Included among those offerings was a basketball game between North Carolina and Duke, and movies “The Count of Monte Cristo” and “The 300.”

“Their help was invaluable,” said Wallin, who is pursuing a Ph.D. in Materials Science at Cornell University. “I don’t know if I can do something of this magnitude again. To do it on your own would be virtually impossible.”

As for food, Wallin began with power gels, granola bars and bananas but “at some point I wanted real food,” he said. He ate “a lot” of General Tso chicken and white rice, mixed in with fruit snacks and jellybeans. 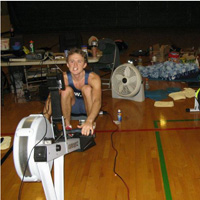 “I went for stuff that was instant sugar,” he explained. “The first eight hours, it wasn’t that hard. Toward the end, it was very hard to keep getting fuel in. I found my mood was very much tied to how much fuel I had left. If I was getting grumpy, I’d eat more and that would help out.”

Wallin said he “coasted” through the first 200,000 meters and that “it didn’t hurt nearly as much as I thought it would.” Then his right Latissimus dorsi muscle began to tense up, and he had to change his stroke to compromise.

“The last six hours were brutal,” he conceded. “It really started to wear on me at the end.”

He said he was never worried that he wouldn’t break the record.

“The last couple of years, it seemed more and more do-able the longer I trained,” he explained. “I went into it with the right mindset. I knew if I finished the time I would have the world record because of my previous training.”