Photo - of -
by Jim Ducibella |  June 27, 2012
Walter J. Zable ’37 may have been one of San Diego’s most influential citizens, but his mind and his heart were never far from Williamsburg and William & Mary, especially Tribe athletics.

Zable, whose $10 million pledge to the College prompted the Board of Visitors to name the Tribe’s football stadium in his honor in 1990, died Saturday of natural causes at age 97. The family’s plans for a memorial service are pending.

“Every college and university has a few graduates who are larger than life, whose accomplishments are simply extraordinary, and whose loyalty to their alma mater is the stuff of legend,” said President Taylor Reveley. “Walt Zable was such alumnus at the College of William & Mary. His alma mater salutes his marvelous life and mourns his loss. Zable Stadium stands in our midst as an enduring remembrance of the great Walt.”

Zable, a Boston native, turned down a scholarship offer from Harvard to attend William & Mary, where he became an honorable mention All-American in football while also lettering in baseball, basketball and track.

While at the College, he received a Bachelor's degree in physics and met his late wife of 65 years, Betty Virginia Carter Zable '40.

Those academic and emotional ties to the school remained strong all of his life, even after he moved to California in the early 1940s.

“Walt was one of the most respected men I ever met, a tremendous businessman and a great supporter of the College, especially the football program,” said Senior Associate Athletics Director for Development Bobby Dwyer. “He was always so very proud not only of his football career, but of his accomplishments in track. His generosity to the College, especially football, was remarkable.

“Whether it was giving for scholarships, facilities, endowments, whatever -- he was always there. And he was so generous that he inspired others to give. He was an absolutely remarkable man, and it's a huge loss for the William & Mary community.” 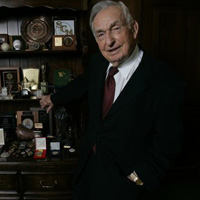 In 1949, he started his own business in his garage focused on microwave technology. The business later moved to an office in Point Loma, Cal., where the Cubic Corporation made its first profitable product, a gadget that measured the power of microwaves.

Cubic is a leading maker of air and ground combat training systems for militaries around the world. It’s also the top maker of automatic fare payment systems for some of the world’s largest mass transit agencies and provides specialized mission support services ranging from communications to asset tracking to the Pentagon and other defense agencies.

Over the years, however, Cubic was in and out of several businesses – in part because of Zable’s knack for finding poor performing firms and fixing them either with technology or management acumen.

Cubic made the first electronic scoreboard, which was installed in a San Diego stadium in 1966. It developed automation technology for elevators, eliminating the need for elevator staff. It built an electronic voting records system five decades ago.

“Walt Zable was a professional-level athlete, a brilliant and curious student, a business visionary, an exceedingly generous philanthropist,” said Athletic Director Terry Driscoll. “He was closely connected to the College his entire life.

“He was a friend from the first time we met. I will miss his wonderfully entertaining personality and sharp sense of humor. William & Mary athletics and the College have lost one of their greatest student-athletes, alumni and benefactors.”

Among his many outside interests, Zable held directorships at the National Football Foundation, the College Hall of Fame and was on the advisory board of the San Diego Hall of Champions.

That passion for athletics permeated many of his relationships at his alma mater.

“I had a wonderful relationship with Walt," said football coach Jimmye Laycock. "I'd give him a call to let him know what was going on. He always wanted to know if I was teaching the guys to tackle better. He was extremely supportive of the program -- not only what we were accomplishing but how we were achieving it. He was very, very proud of that."  Laycock escorted Zable through the Laycock Center during the dedication of the building in June of 2008 and said Zable regaled him with tales of his days at the College and how things were done back then. Zable also was friends with former San Diego Chargers coach Sid Gillman, one of football's greatest innovators, and occasionally shared some of those conversations with the Tribe coach.   "He knew his football, and he was always interested in what was happening here,” Laycock said. “I really enjoyed him, getting to know him, talking to him. I'll miss him. He was a great guy."

Zable leaves behind his son, Walter C. Zable and his wife Stefanie, daughter Karen and her husband Carter M. Cox, and five granddaughters.


The San Diego Union-Tribune contributed to this story.