In 2008, professors of government Amy Oakes and Dennis Smith were faced with a two-fold problem. On one hand they recognized that William & Mary was surrounded by a foreign policy community hungry for new ideas, and on the other that W&M students were eager to tap into that community but had no vehicle to do so.

“A lot of students came to us in our academic classes and expressed an interest in doing policy relevant work,” said Oakes. “We wanted to teach them how to do work that would be of interest to the policy-making community, which is not something that they would necessarily learn in another course.”

The solution they developed was the Project on International Peace and Security (PIPS), an elite, undergraduate think tank modeled after the Brookings Institution and the Carnegie Endowment for International Peace, which operates from W&M’s Institute for the Theory and Practice of International Relations (ITPIR) with Smith and Oakes as co-directors.

Each academic year PIPS selects six research fellows, with each fellow identifying an emerging international security challenge and writing a policy brief that provides creative recommendations. Fellows are invited to apply, and must be rising juniors or seniors with a cumulative GPA of 3.7 or above.  At the end of the year, fellows publish their briefs, as well as present them at a student symposium in Washington, D.C., and receive three academic credits for their work.

With initial funding from the Roy R. Charles Center and the Mellon Foundation, Smith and Oakes set out to contact policymakers and solicit their help in brainstorming potential topics for student research.

“We sent out a ton of letters and emails, asking what types of questions they thought were important right now,” recalled Smith. “We got a decent response that first year. We generated a list of about 80 questions.”

The pair also met with skepticism both from the foreign policy and academic worlds. Some policymakers wondered if anything undergraduates could produce would really be worthwhile to them, while some academics refused to believe that any student would really be willing to work all year on a policy brief and receive only three credits for it.

“Anything policy oriented is focused on graduate students, that’s the model,” explained Smith. “Undergraduates, in many cases, are seen as not capable of doing it. Part of what we’ve tried to prove through PIPS is that undergraduates are capable of this; they can say something meaningful, and what they need is guidance. That guidance is readily available amongst faculty. It’s certainly available amongst alums and folks in the policy community, we just need a vehicle to capitalize on that interest.”

“When you think about it, these are the future graduate students,” added Oakes. “We’re just getting them a year or two before they start graduate school. They are really outstanding, and with just a little help they produce spectacular work.”

Throwing themselves into their research, the 2008 – 2009 PIPS fellows produced work of such high quality that after the inaugural student symposium in Washington, D.C., David M. Finkelstein, vice president of the Center for Naval Analyses, wrote to then-W&M provost Geoffrey Feiss to express his admiration.

“Speaking as a person who lives and works in the ‘think tank’ world of greater Washington, D.C., I am absolutely impressed by what PIPS has achieved in its first year. I thought you would want to know that your students did so well in representing the College of William and Mary and that persons like myself think that the Project on International Peace and Security is an important initiative and a great investment in the future of Our Nation.”

This praise was just the beginning for PIPS. Soon members of the policy community were getting in touch and offering to help fellows brainstorm on research questions, to provide interviews for original research, and to read the drafts of their briefs. 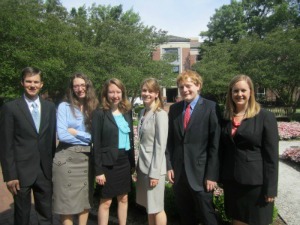 This year’s symposium discussant, Rick “Ozzie” Nelson, Director of the Homeland Security and Counterterrorism Program, and Senior Fellow, International Security Program at the Center for Strategic and International Studies (CSIS), was alerted to PIPS and its stellar work by the father of a prospective W&M student who had seen the project’s website.

“There’s a real desire among those in the senior policy community to mentor, and I don’t think people approach them to do that,” said Smith. “We’ve been very successful with alums, but also with well-known people. If they think the idea is interesting and that you’re serious they’ll give you a fifteen-minute conversation.”

With the success of each year’s fellows building on each other, and word of students’ innovative research getting around the policy community, the 2011-2012 PIPS fellows found themselves making the most of W&M’s Williamsburg location by going to Congress, the Pentagon and myriad think tanks to meet with policy professionals and discuss their ideas.

“Throughout the year I was able to consult with policy analysts, CEOs and government employees to receive feedback on my policy proposal,” remembered Emily Pehrsson ’13, author of Making the Grade: An International Regulatory Framework for Cybersecurity. “Participating as a research fellow in PIPS gave me a close-up look at what a career in security policy would entail.”

The rigorous preparation Smith and Oakes require of fellows includes grueling editing sessions each week in which every fellow critiques the work of others, and countless presentation rehearsals with different audiences. It’s all designed to prepare them for the culminating event of the year: the PIPS Student Symposium in Washington, D.C.

“I remember being pulled out of bed at two a.m. to rehearse my paper, or getting seven or eight emails a day from Amy and Dennis, asking for rewrites to different sections of my paper,” said Efrat Rosenzweig ’12, author of Crowdsourcing Global Security: Fighting Pandemic Disease in the Information Age. “But most of all what I remember is the moment, just after we had all presented our work in D.C., when everyone in the room was queuing up to talk to us, to ask questions and discuss our work. The realization that our work had caused people to think about things they would otherwise have ignored. That we had made a difference.”

In academia too, PIPS is making waves. In June 2012, Smith and Oakes were asked to present “Bridging the Academic-Policy Divide: PIPS, An Undergraduate Think Tank” at the Council of Undergraduate Research’s annual conference.  They spoke on the theme of innovation in undergraduate teaching, and had years of PIPS successes to draw on and support their model.

Looking forward, Oakes is optimistic that PIPS will continue to evolve as an outstanding undergraduate program.

“We’re entering into a new phase, expanding what PIPS is capable of doing,” she said. “We have a track record now—proof of the kind of work we can produce.”

PIPS is currently accepting applications for 2012 – 2013 fellows. Applications will be accepted until August 15, 2012.