Twenty-five drawings in all media make Michelangelo: Sacred and Profane the most important Michelangelo show seen in the U.S. in decades. 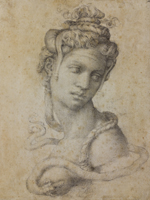 The Muscarelle Museum of Art at the College of William & Mary announced today that renowned Michelangelo scholar Dr. Pina Ragionieri will speak at the museum at 6 p.m. on Tuesday, Sept. 25 to describe and illustrate the 26 original drawings by Michelangelo that will be in the major international exhibition,"Michelangelo: Sacred and Profane Masterpiece Drawings from the Casa Buonarroti," opening Feb. 9, 2013.

The landmark exhibition is being organized in honor of the 30th anniversary of the foundation of the Muscarelle Museum of Art in 1983. Ragionieri, the director of the Casa Buonarroti museum in Florence who owns the drawings, will also attend the opening ceremonies and will be honored for her contributions to the studies of the great master.

Many of Michelangelo’s most renowned drawings will be showcased in this rich and varied selection of 25 drawings, which will be authoritatively discussed by Ragionieri from a historical point of view in her slide lecture, which is free and open to the public.

“I greatly look forward to this opportunity to display the treasures of the Casa Buonarroti at the Muscarelle Museum at the College of William & Mary,” she said. “International exhibitions introduce our museum not only to the specialists, but also to a broader public overseas.”

The exhibit follows on the success of the 2010 exhibition at the Muscarelle "Michelangelo: Anatomy as Architecture, Drawings by the Master." The purpose of the new exhibition with its unprecedented "sacred and profane" theme is to investigate the artist’s innermost philosophy as revealed in his original, often astonishingly beautiful, drawings. 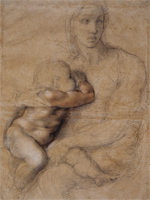 Throughout his career, Michelangelo (1475-1564) alternated between interpretations of the divine and the worldly, or profane. The master’s powers to evoke the sacred are fully displayed in the large drawing "Virgin and Child," which is one of Michelangelo’s most admired images. The statuesque figures of the child is contrasted to the expressive freedom of the Madonna’s face, which appears to see the future with foreboding.

The imaginary portrait of Cleopatra is considered one of the Renaissance genius’s most poetic conceptions, which he made as a gift for his friend Tommaso Cavalieri. The serene refinement of the ancient seductress on the front side of the drawing is surprisingly contrasted on the reverse by an expressionistic rendering of the same woman in a state of anguish. The conflicting faces of Cleopatra suggest the theme of this exhibition, curated by Muscarelle Assistant Director and Michelangelo scholar Dr. John T. Spike.

A renowned sculptor and painter, Michelangelo’s legacy as an architect was no less monumental. The Casa Buonarroti holds by far the most extensive and important collection of Michelangelo architectural drawings in the world, from which a selection of highlights has been chosen. The 25 drawings selected for this exhibition are divided between studies for paintings and designs and plans for churches and military fortifications, including several major sheets never previously exhibited in the U.S.

Like Leonardo da Vinci, Michelangelo was also called upon to invent fortifications: He responded with fantastic drawings of walls and portals equipped with pincers and shells like giant crabs. These visionary drawings gain impact from their notable dimensions, which range in height and width from twelve to fifteen inches, and a few are even larger. The important ecclesiastical designs chosen for display in the exhibition include several plans too ambitious and costly to be realized: the facade of the church of San Lorenzo in Florence, the ground plan of the church of San Giovanni dei Fiorentini in Rome, and a new balustrade for the dome of the cathedral in Florence. 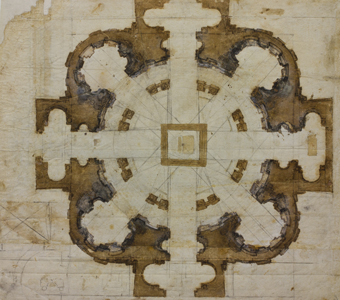 "Michelangelo: Sacred and Profane" will be on view at the Muscarelle through April 14, 2013, and will travel to the Museum of Fine Arts in Boston, where it opens on April 21 and closes on June 30, 2013. Founded in 1870, the Boston MFA is one of the most comprehensive art museums in the world with a collection comprising more than 450,000 works of art. The MFA welcomes more than one million visitors each year to experience art ranging from ancient Egyptian to contemporary, special exhibitions, and innovative educational programs. The exhibition will be accompanied by a richly illustrated, hardcover catalogue produced by the Muscarelle Museum of Art.

The Muscarelle Museum of Art at the College of William & Mary is located on the grounds of the second oldest college in the U.S., a highly ranked liberal arts and research university. The Muscarelle is celebrating 30 years since its founding under Director Glenn Lowry, currently the director of the Museum of Modern Art in New York. Alongside this exhibition, the Muscarelle has organized its first-ever show featuring major Italian Baroque paintings. Mattia Preti was a master painter very close to Caravaggio and is the artist showcased in "Mattia Preti (1613-1699) Paintings from North American Collections in Honor of the Fourth Centennial of his Birth." Lenders to this exhibition include the National Gallery of Art, the Getty Museum, Los Angeles County Museum, Toledo Museum of Art, Museum of Fine Arts Houston and other institutions.

The Muscarelle Museum of Art is located on Jamestown Road on the campus of The College of William & Mary in Williamsburg, Virginia. For more information about this exhibit or the Museum in general, please call (757)-221-2700 or visit www.wm.edu/muscarelle.

During this exhibition, there is an admission fee of $15. Admission is free for Museum members, William & Mary faculty, staff, and students, as well as children under twelve.