Walter J. Brodie ’57, an All-American end and former Southern Conference player of the year, died Tuesday, January 3, of a heart attack. He was 80.

"Walt Brodie was an integral part of the William & Mary football tradition," reflected Tribe football coach Jimmye Laycock. "He was an outstanding player who moved on to a successful career after his graduation. Walt spent a great deal of time around the program and formed lasting relationships with generations of our student-athletes. He was always willing to share his unique perspective with the staff, and I know he will be greatly missed by the entire William & Mary football family. Our thoughts are with his family at this difficult time." 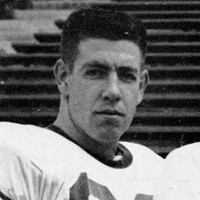 Brodie, a native of Hopewell, Va., has the unique distinction of being one of the select few – possibly the only – football player selected an All-American while playing for a team that did not win a game. Brodie was chosen a second-team All-American by the Associated Press in 1956, a year in which the Tribe posted an 0-9-1 record.

He went on to become a vice president for sales and marketing in the banking industry and, in his later years, was a published poet and author.

Funeral arrangements are pending. Those wishing to express their condolences or to get further information can do so by e-mailing paigebrodie@yahoo.com.