For the first time ever, the William & Mary men's swimming program will be represented at the U.S. Olympic Trials this summer after two upperclassmen swam their way into history this past weekend in Richmond.

Competing at the PSDN Last Chance meet, Sidney Glass ’13, from Mechanicsville, Va., and Andrew Strait ’14, from Henrico, Va., both smashed the Trials qualifying standards to earn the right to compete in Omaha, Neb., June 25-July 2.  Strait led off on Friday night with a 2:05.68 showing in the 200m individual medley, becoming the first men's swimmer in College history to qualify for the Olympic Trials. His performance was 7.3 seconds faster than his previous best in a 50-meter pool, an almost-unheard of improvement at this level of swimming, and was more than a second better than the qualifying standard. 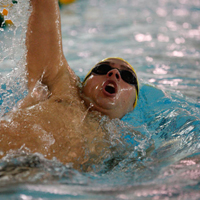 Strait then followed with two more qualifications on Saturday and Sunday, swimming 1:04.40 in the 100m breast and 2:19.99 in the 200m breast, to become the first Tribe  swimmer (men or women) to qualify for three Trials events. He had previously gone 1:06 in the 100 breast and 2:24 in the 200, both times coming from before his freshman year at the College.   Meanwhile, on Saturday, Glass earned the breakthrough he had been seeking all spring since the end of the NCAA season.  The rising senior touched the wall in the 100m back in 57.54 seconds, just under the standard of 57.59.  His previous best times in the event both came this March at the Speedo Champions meet at George Mason, when Glass had swims of 58.47 and 58.39 seconds.  The two Tribe record-holders will be joined in Omaha by two more members of the Green and Gold family.

Hailey Hewitt ’12 earned a spot in the women's 200m backstroke earlier this spring, after swimming 2:17.97 just two weeks after winning the CAA title in the 200y back. She is the second Tribe women's swimmer to qualify for the Olympic Trials, after Kate Radloff ’10 competed in the 50m and 100m freestyles in 2008. 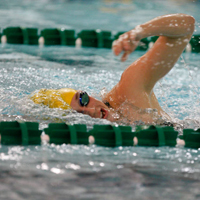 Also heading out west next week is incoming freshman Will Manion, from Haddonfield, N.J., like Glass competing in the 100m back. Manion earned his spot with a 57.47 showing in March at the Purdue Invitational Grand Prix.  This weekend's heroics are merely the latest in a long line of accomplishments in 2011-12 for both Strait and Glass.  Strait was named the CAA Men's Swimming Scholar-Athlete of the Year this spring, another first for the W&M men's swimming program, and broke seven school records at the conference championships, including five in six individual event swims. He finished second in both the 400y IM and the 200y breast, and was third as part of the Tribe's 200 free relay.

Glass was fifth in the 100y back and ninth in the 200y back at the CAA Championships this year, and also set school records as part of both the 200 free relay and 200 medley relay for the Green and Gold.  He heads into his final collegiate season ranked second all-time at W&M in the 100 back, and third in the 200 back.

In Omaha, the top two finishers in each event after three rounds of competition will represent Team USA at the London Olympics later this summer, provided they've met the Olympic qualifying standards as well.