Paul Galanti, commissioner of Veterans Services for the Commonwealth of Virginia and a highly decorated veteran of the Vietnam War, will speak at William & Mary on Sept. 27, from 4 to 5 p.m.

The event, which is free and open to the public, will be held in the Commonwealth Auditorium of the university’s Sadler Center. The subject of his speech will be “The Hanoi Hilton: Post-Graduate Survival Training.”

In November 1964, Galanti joined Navy Light Jet Attack Squadron 216 (VA-216) based aboard the carrier USS Hancock which departed for Southeast Asia in November 1965. Galanti flew 97 combat missions in Vietnam before being shot down and captured on June 17, 1966. He remained a prisoner of war, enduring brutal conditions at Hoa Lo – sarcastically called the “Hanoi Hilton” by POWs -- for nearly seven years before being released on Feb. 12, 1973. 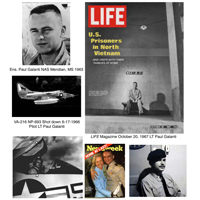 Following rehabilitation at Portsmouth Naval Hospital in Virginia, the Navy sent him to the Navy Recruiting District in Richmond as its executive officer. He received the Master of Commerce degree from the University of Richmond in May 1976 after two years of night school. He then became commanding officer of the Richmond Recruiting District.

In July 1979 he moved to Annapolis, Md., to serve in the Office of the Commandant at the Naval Academy.

After being medically retired from the Navy, he became, in 1983, the first non-pharmacist executive director of the Virginia Pharmaceutical Association in its 100-year history. Joining the Medical Society of Virginia staff in September 1991, Galanti became the executive vice president of the society in 1993. In both organizations, he used his computer expertise to vault them into the forefront nationally for association automation.

In 2000, he was the Virginia campaign director for Senator John McCain’s presidential bid. He is currently active in the American Ex-Prisoners of War service organization and remains active in Virginia politics. He worked with McCain again on his 2008 bid.

In April 2010, Gov. Bob McDonnell named him commissioner of veterans services for the Commonwealth of Virginia. McDonnell subsequently appointed him to the Board of Visitors of the Virginia Military Institute in Lexington.

Galanti has appeared on the covers of Life, Newsweek and Time. Selling Power, a national sales journal, highlighted his success story in a six-page section and chose him as one of the 12 outstanding motivators in the United States.

He has appeared in several documentary films including the Discovery Channel’s Emmy Award-winning “Vietnam POWs, Stories of Survival” and Public Television’s “Return With Honor.” He is past president of the Virginia Aviation Foundation, the Science Museum of Virginia Foundation and Nam-POWs, the national Vietnam POW Fraternity. He serves as an elder at First Presbyterian Church in Richmond. Additionally, he serves on the Secretary of Veterans Affairs’ Advisory Committee on former POWs.