The College of William & Mary will once again serve as a title sponsor when the second annual “Run for the Dream Weekend” takes place Saturday and Sunday, May 19 and 20. Online registration is available until 8 p.m. on Thursday, May 17. Participants may also register during race weekend at the Expo or Start line.

All races will start from in front of Phi Beta Kappa Hall and end inside Zable Stadium. In addition, the Sunken Garden will serve as the site of post-race parties and award ceremonies both days.

“Running on the campus and through Colonial Williamsburg is a great venue,” she said. “There’s such a supportive running community here that it’s just perfect.” 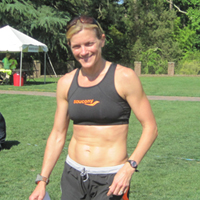 Roads within The College will be closed both days from approximately 7 a.m. to 1 p.m. Affected streets will be marked with temporary “Official Course Route” signage.

The Run for the Dream 8K again has been chosen as a national championship race by USA Track & Field (USATF). The 2012 USA Masters 8 km National Championships will be held on Saturday. The championship designation is expected to draw elite Master class athletes from around the country.

Scheduled to return is inaugural race winner Mbarak Hussein, 47, who last year ran a national 8 km record time, one second faster than the record set by Bill Rodgers in 1993. Hussein is a two-time USA Marathon champion (’05, ’06) and three-time winner of the Honolulu Marathon (‘98, ‘01, ‘02).

Also returning will be first-place female finisher, Chris Kimbrough, 42, who last year won her first national Master title during the Run for the Dream. Kimbrough went on to win the USATF 2011 Cross Country Championships in December.

In addition to the 8K Run/Walk, the Run for the Dream Weekend includes a Kids Fun Run on Saturday and a half marathon on Sunday.

The Kids Fun Run takes place at Zable Stadium and includes a choice of three lengths – 100 meter, 400 meter and one mile.

Runners interested in participating may register online at www.RunforAchievableDream.com.

Proceeds from the Run for the Dream will benefit An Achievable Dream, nationally recognized K-12 schools dedicated to the belief that all children can learn and succeed regardless of their socio-economic background, and that education can break the cycle of poverty.

Wounded Warriors from throughout the United States are making plans to participate. More than 50 Wounded Warriors, including hand cyclists, will lead off both races.

Both Achilles Freedom Team and Warfighter Sports recognize the importance of sports and recreation in the successful rehabilitation of individuals with disabilities. The Achilles Freedom Team of Wounded Veterans has introduced more than 400 veterans to marathon racing, helping them to train and compete in road races in the U.S. and internationally.

Retired Col. George E. ”Bud” Day, a Congressional Medal of Honor recipient for bravery during the Vietnam War, will kick off the Fit to Run, Fit to Dream 8K Run/Walk on Saturday. That evening, Colonial Williamsburg will present A Salute to the Nation on the Governor’s Palace Green.

Hosted by actor Joe Mantegna, this special program will highlight the unique spirit and identity of America with music, words and fireworks, followed by a Military Tattoo of Fife & Drum units from around the country. This event is free and open to the public.

In addition to the College, title sponsors are TowneBank, Colonial Williamsburg and Busch Gardens. Presenting Sponsors of the 8K Run/Walk are Smithfield Foods and Riverside Health System. Mancon and Spectrum are sponsoring the Wounded Warriors program.

Noon-8 p.m. -- Run for the Dream Expo at the Williamsburg Woodlands Conference Center, 109 Visitor Center Drive, Williamsburg. The event is free and open to the public.

8:00 p.m. -- “Salute to the Nation.” Hosted by actor Joe Mantegna, Colonial Williamsburg presents a program showcasing 250 years of ideas that have created the unique spirit and identity that is America in all its variations. The event will conclude with a fireworks display and a Military Tattoo of fifes and drums from around the nation in a parade from the Palace Green to the Capitol. The event is free and open to the public.

7:00 a.m. -- Run for the Dream Half Marathon; starting line is in front of Phi Beta Kappa Memorial Hall. Finish line is at Zable Stadium.