Henrik Borgstrom ’92, chairman of Niagara University’s department of modern and classical languages, wrote a new adaptation of the text for Le Théâtre de la Chandelle Verte, a French-language touring company that he has been involved with since 2006. He also will perform.

Borgstrom estimates that it took him about 16 months to research and write the new adaptation. The original is rarely performed because audiences struggle with 15th-century language and the often-obscure cultural references from 600 years ago.

“I have always loved this play, and I teach it regularly in my French literature courses,” Borgstrom said. “There are versions of this play in modern French, but even the newest editions include hundreds of footnotes just to explain the jokes.

“Since my own research focus in French is theatre performance, I thought it would be an interesting challenge to write an adaptation of the play that would speak to contemporary audiences, in particular, to students of French. I had already begun collaborating with Le Theatre de la Chandelle Verte, for whom I had adapted and directed a number of plays. This was a perfect opportunity, since Chandelle’s specifically ties live theatre performance to language learning, so when I proposed to them my project for La Farce de Maitre Pathelin, they were immediately on board.”

William & Mary will be the first stop on the troupe’s 2012 tour, followed by performances in Burlington, Vt., and Minneapolis. The show Borgstrom’s troupe will perform was “cutting edge” for its day, he says, reflecting a “profound” shift in the mentality of the early Renaissance. 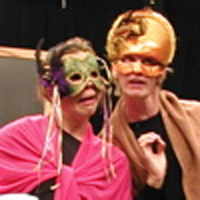 “This is a transitional moment when humanist principles are beginning to replace the God-centered universe of the Middle Ages,” he explained. “This is also a time when the merchant class is starting to wield some power in France’s urban centers, heralding a fundamental shift in the country's economic system.

“‘La Farce De Maitre Pathelin’ is extremely irreverent of the great social institutions of the day, in particular the Church, commerce and the law.”

Borgstrom said that even though the play is in French, audiences do not have to speak that language in order to fully appreciate what he called “the spectacle.”

“This is Chandelle’s specialty, creating performances that are visually interesting,” he said. “In fact, Christine Iaderosa, who directed this play as well as many others in Chandelle’s repertoire, does not speak French!

“This is an intentional choice on the part of the troupe so that the actors can step away from the text somewhat and create a kind of second visual story through their physicality.”

Although tickets are required for the event, which is sponsored by the Wendy and Emery Reves Center for International Studies, the performance is free. Tickets can be obtained by calling 1-800-HISTORY or by stopping by any Colonial Williamsburg ticket center between now and the show. If not sold out, tickets can also be obtained the night of the performance at the Kimball Theatre box office.