Photo - of -
by Jim Ducibella |  February 17, 2011
The College of William & Mary will play an integral role in the first-ever “Run for the Dream,” a two-day event featuring a half-marathon, 8K walk/run, and a one-mile fun run. The races will be held on May 21-22, with proceeds benefitting An Achievable Dream and Wounded Warriors programs.

All three races, including the “Fit to Run, Fit to Dream” 8K, which has been chosen as the 2011 USA Masters 8km championship by USA Track and Field, will begin at the intersection of Dillard Avenue and Jamestown Road and end at Walter J. Zable Stadium.

Competitive runners who are interested in competing in the 8K championship must register through the USATF website. Non-competitors may also register for the 8K Run/Walk, which will be the culmination of a training program in local middle schools focusing on fitness and healthy lifestyles.

Early registration fees are in place until April 1.

Each year, USATF works with events like The Fit to Run, Fit to Dream 8K to conduct a championship series that highlights USATF Long Distance Running Programs in the 40-plus age category. The Championships designation is expected to draw elite masters athletes from around the country. This is the first time an inaugural race has been awarded a Masters National Championship.

Other races that weekend include a Children’s Fun Run and Half Marathon. Runners interested in participating in those can register online. The first 3,000 registrants for the half marathon will receive a free pass to Busch Gardens, Williamsburg to be May 20-22. 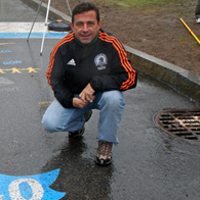 All races start on the campus of The College of William & Mary, wind through Colonial Williamsburg’s Historic Area, and finish at Zable Stadium. The Half Marathon route also takes runners on the Colonial Parkway toward the James River before returning to the City of Williamsburg.

The race director is Dave McGillivray, well known throughout the running world and the race director of the Boston Marathon since 1987.  A Race Expo will be held Friday and Saturday at the Colonial Williamsburg Woodlands Conference Center, the Race Headquarters. Kelly Cannon ’05, director of development and special events for An Achievable Dream, is assisting McGillivray as Event Director for the weekend as well.

An Achievable Dream is a nationally recognized K-12 school dedicated to the belief that all children can learn and succeed regardless of their socio-economic backgrounds, and that education can break the cycle of poverty. The Wounded Warriors programs are dedicated to assisting and advocating for the severely wounded, ill, and injured members of the armed forces and their families.

The College, TowneBank, Colonial Williamsburg, and Busch Gardens are the title sponsors of the Run for the Dream. Presenting sponsors of the Fit to Run, Fit to Dream 8K Run/Walk are Smithfield Foods and Riverside Health System. Mancon and Spectrum are sponsoring the Wounded Warriors program.