Minnesota Congresswoman and William & Mary alumna Michele Bachmann LLM ‘88 officially launched her run for president on Monday during a campaign event in her hometown of Waterloo, Iowa. 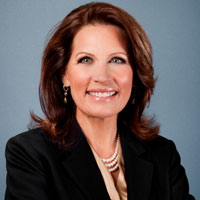 Bachmann, who is seeking the Republican nomination to run for president, received her master’s degree in tax law from the nation’s oldest law school. Bachmann, who was first elected to U.S. Congress in 2006, was the first Republican woman to represent Minnesota in the U.S. House of Representatives. She is the founder of the House Tea Party Caucus.

Prior to serving in Congress, Bachmann was elected to the Minnesota State Senate in 2000 and previously spent five years as a federal tax litigation attorney. She currently sits on the Financial Services Committee (FSC) and the Permanent Select Committee on Intelligence.