Professor Emmett Duffy of the Virginia Institute of Marine Science (VIMS) has been honored with the inaugural Kobe Award for his achievements in marine science.

The international award, which includes a cash prize of 1 million Japanese yen (US$ 11,900), was established by Suma Aqualife Park in Kobe Japan to recognize and honor an individual who has contributed to progress in the fields of marine biology and ecology. 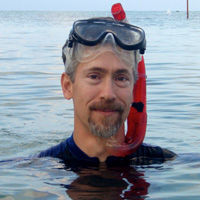 Duffy, Loretta and Lewis Glucksman Professor of Marine Science at VIMS, was flown to Japan for a formal award ceremony on July 10. The ceremony was originally scheduled for March 26 but was postponed due to the earthquake and tsunami that devastated the island nation. Duffy donated half of his cash prize to Japanese relief efforts and used the remainder to fund research travel.

The 5-member selection panel recognized Duffy for his pioneering work in marine ecology and biodiversity, with special mention of his discovery of “eusociality” among shrimps. Eusociality—most familiar among ants, bees, and other social insects—refers to life in large, cooperative colonies. It is marked by living with extended families in which only one or a few “queens” reproduce, and by cooperative care and defense of young. Duffy was the first to discover a case of eusociality in a marine animal, the sponge-dwelling Caribbean shrimp Synalpheus regalis. His subsequent work has identified several other eusocial shrimp species in this group.

Duffy’s recent work has focused on the importance of biodiversity in marine ecosystems. He is the lead scientist on a 3-year grant from the U.S. National Science Foundation to establish a global experimental network for studying how nutrient pollution and changes in biodiversity impact ecologically and economically important seagrass beds. He is also an active member of a collaborative effort at VIMS and the College of William and Mary to harvest algae for nutrient reduction and use as a biofuel.

The 5-member selection panel for the Kobe Award includes Professor Akira Asakura from Kobe University and Dr. Naoki Kamezaki, the director of the Suma Aqualife Park.