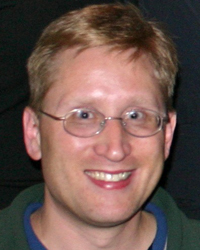 Professor Mark Brush of the Virginia Institute of Marine Science, College of William and Mary, has been voted president-elect of the Atlantic Estuarine Research Society (AERS), the mid-Atlantic regional affiliate of the international Coastal and Estuarine Research Federation (CERF).

Brush, a coastal systems ecologist and ecosystem modeler, will serve one year as AERS president-elect, two years as president, and one year as past president, along with membership on the CERF governing board while president.

Current AERS president Peter Straub, an Associate Professor of Biology at Richard Stockton College in New Jersey, says “Mark’s going to be a great president. He’s an organized person and knows how to get things done.” Straub adds that “Mark’s broad expertise within estuarine science gives him a good understanding of what everyone else is doing—he really knows the science. That expertise allows him to be comfortable with the broad range of different scientific disciplines within AERS—from physical oceanographers to marsh biologists.

“I’ll be leaving this society in capable hands,” says Straub. Brush will succeed him as AERS president in spring 2012.

VIMS Dean and Director John Wells says “Mark’s election is further evidence of the quality of our faculty and the important role they play in research and resource management, not only in Virginia but regionally and nationally as well.”

AERS is made up of members from Delaware, Maryland, North Carolina, New Jersey, Pennsylvania, Virginia and Washington D.C. It is one of CERF’s two founding societies, having joined forces in 1971 with the New England Estuarine Research Society to form the Estuarine Research Federation, today’s CERF. CERF now comprises seven affiliate societies along the East, Gulf, and West coasts of North America, including Canada and Mexico.

CERF, with more than 2,500 direct and affiliate members worldwide, is the leading scientific society for study of estuaries and other shallow-water coastal habitats. It publishes Estuaries and Coasts, a highly regarded journal for original research in coastal science and management, and hosts a biennial conferencethat draws scientists, students, and policymakers from around the globe.

Brush says he has been “captivated by the concept of the CERF affiliate societies and their blend of science, collegiality, and friendliness” since he first became involved with the New England affiliate during his graduate studies at the University of Rhode Island.

As president-elect, Brush says he looks forward to “charting a course for AERS that will leave the society even stronger, more vibrant, and more relevant than it is today.” He plans to proceed through “active engagement of new professional members, recruitment and welcoming of student members, and sound guidance from our long-standing members.”

He also looks forward to serving on the CERF governing board during what he says is “an exciting period of change for our parent society.”

Prior to his selection as president-elect, Brush served for two years on the AERS board as chair of the program committee, where he collaborated with host institutions and fellow committee members to organize the Society’s annual pair of spring and fall meetings. As president-elect, he looks forward to “enhancing our meeting attendance and representation from multiple groups, including those working in estuarine research, education, and management.” 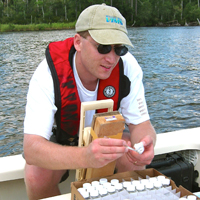 Brush arrived at VIMS in 2002 as a post-doctoral researcher and joined the faculty in 2006. His research combines field and laboratory studies with computer modeling to better understand and manage coastal ecosystems. His recent research has focused on nutrient pollution and its effect on water quality, algal blooms, and low-oxygen dead zones. He has also been involved in studies of menhaden and their effects on water quality in Chesapeake Bay.