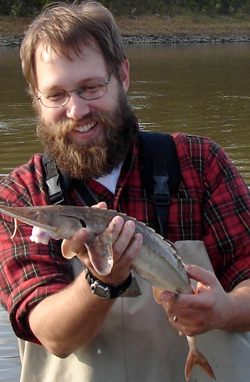 Like Indiana Jones, professor Eric Hilton of the Virginia Institute of Marine Science, College of William and Mary, is scouring museums around the world in search of hidden treasures. But instead of crystal skulls or the Ark of the Covenant, Hilton’s holy grail is to correctly identify new and preserved sturgeon specimens in order to resolve the tangled classification of one of the world’s most ancient and threatened group of fishes.

Of the 25 currently recognized species of sturgeon worldwide, every one is endangered, threatened, or otherwise afforded some type of legal protection. They suffer from overfishing (mostly for caviar), habitat loss, dam building, and boat strikes, among other threats. NOAA’s National Marine Fisheries Service has proposed that the Atlantic sturgeon, native to Chesapeake Bay and its tributaries, be listed as an endangered species.

Hilton says the ultimate goal of the study—a collaborative venture with other sturgeon experts across the globe— is to “develop a rigorous, predictive classification for sturgeons worldwide.”

With that, says Hilton “we can make informed conservation decisions for rare and poorly known species, based on ecological and behavioral data that we might have for a closely related species that is more abundant and better studied.”

Hilton will leave VIMS on October 15 for a 3-and-a-half-week expedition to visit sturgeon collaborators and collections at the Russian Academy of Sciences in St. Petersburg; the Moscow University Collection in Moscow; the Danube Delta National Institute in Tulcea, Romania; and the Muséum National d'Histoire Naturelle in Paris, France. Joining him is VIMS post-doctoral researcher Casey Dillman. (To follow along with the pair’s museum blogs, visit the VIMS’ blog page at http://vims.blogs.wm.edu/.)

Hilton’s work—funded by a 3-year grant from the NationalScience Foundation—will likely include future trips to the Linnaeus Collection in Uppsala, Sweden; the Sturgeon Research Center in Krasnodar, Russia (near the Black Sea); the East China Sea Research Institute in Shanghai, China; and—closer to home—the Field Museum in Chicago, the Illinois Natural History Survey Collection, and the University of Alabama. He has already visited one collection at the Institute of Hydrobiology in Wuhan, China.

Hilton’s study will be the first modern attempt to sort the taxonomy of all sturgeons at all levels—from family to genus to species. Although researchers have recently made strides toward cleaning up sturgeon classification, problems persist. During the last century, scientists have used more than 20 different names to describe the 4 currently recognized sturgeon genera. Hilton says the species-level taxonomy of sturgeons is even more confused, with hundreds of names for the 25 currently recognized species.

The researchers will focus their attention on the “type specimen” of different sturgeon species around the world. Like the official platinum-iridium cylinder that defines the mass of a kilogram and pound, a type specimen is the single preserved organism that scientists use to define exactly what is and is not included in a particular species.

Unfortunately, says Hilton, “Ten of the sturgeon species that are currently considered valid have no known type materials, and the type specimens of an additional four species are considered lost.” Hilton and his collaborators will assign new type specimens to these species in order to stabilize the current use of species names. They’ll conduct all their work in accordance with the International Code for Zoological Nomenclature, the globally accepted set of rules for naming organisms.

“Defining a type specimen is the starting point for an accurate classification,” says Hilton. “We have to know exactly what scientists mean by Acipenser oxyrinchus [the Atlantic sturgeon] or Acipenser dabryanus [the Yangtze sturgeon]. Is this set of specimens from the Yangtze River thesame as the type specimen, or not? Should we call them different things?”

Hilton and his collaborators will combine traditional and newer techniques to help clear up the taxonomic confusion. Hilton is an internationally recognized expert in sturgeon anatomy and classification, using dissection and detailed studies of a sturgeon’s skeleton, muscles, and morphology to place a specimen in the correct species. Dillman and graduatestudent Katie May Laumann bring expertise in studying the genetic material within the nucleus and mitochondria of sturgeon cells.

The VIMS team will collect tissue from each new specimen studied, returning the samples to the Fish Collection at VIMS for archiving, genetic analysis, and sharing with other labs. Archiving and sharing their data is in fact a key part of the project, says Hilton.

They also plan to communicate their results to non-scientific audiences. “It’s important,” says Hilton, “to remember that users of classifications extend beyond systematic biologists to include conservation groups, lawmakers, and the general public, particularly for highly endangered groups of organisms such as sturgeons.”