A new partnership between William & Mary's Virginia Institute of Marine Science and the Watermen’s Museum in historic Yorktown will give local students a unique opportunity to dive into Colonial history—literally.

The project, funded by a 1-year grant from the National Science Foundation, will allow the students to pilot unmanned robotic submarines in an attempt to monitor the conservation status of shipwrecked vessels scuttled by Lord Cornwallis during the Battle of Yorktown in 1781—the last major battle of the American Revolution.

Leading the project are Dr. Mark Patterson, head of the Autonomous Systems Laboratory at VIMS, and Dr. David Niebuhr, Director of theWatermen’s Museum. The students are from Point Option High School in Newport News, the Williamsburg Montessori Middle School, and Peasley Middle School in Gloucester. VIMS graduate student Jennifer Elliott, who is teaching at Peasley as part of the VIMS GK-12 partnership, will also be involved.

The project capitalizes on the recent discovery in the York River of two new shipwrecks from the Yorktown battle and siege. Previous archeological work had revealed the presence of nine other wrecks, including the HMS Betsy, the target of intensive study during the 1970s and 1980s. These wrecks are listed on the Virginia Landmarks Register and the National Register of Historic Places. 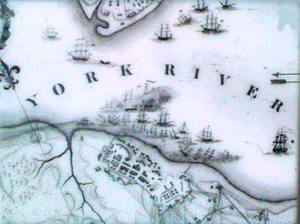 The two new wrecks were discovered by pioneering marine archeologist Dr. John Broadwater—leader of the Betsy study—during a survey done for the Virginia Department of Historic Resources. Patterson also independently discovered one of the sunken vessels during a mission with Fetch I, an “autonomous underwater vehicle” or “AUV” developed in his lab. Both explorers made their discoveries using side-scan sonar units manufactured by Marine Sonic Technology of Gloucester. These can be operated from a boat, or deployed on a robot sub like Fetch.

The researchers believe the previously buried wrecks were uncovered by strong currents during recent tropical storms, and are concerned that their exposure on the bayfloor may lead to rapid degradation. By mapping the wrecks’ outlines, the students will help conservators monitor their condition and take preventive measures if necessary.

“Enabling students to use advanced robotics at a site of national significance in marine archeology will be a first,” says Patterson. “To put these tools into the hands of school kids, to have them monitor shipwrecks that are starting to erode out of the sediment, is a great way to get them interested in science.”

“These kids are going to be some of the very first people to explore these wrecks, as part of their science classes,” adds Niebuhr. “They are going to be introduced to real problems—it’s not pretend, it’s genuine. Very rarely are you able to do that in most school programs.”

Though the exact schedule of the robotic missions is still being planned, the broad outlines of the program are in place, and one group from Point Option High School has already completed the first of the three fieldtrips planned for each school. The fieldtrips are to the Watermen’s Museum, which sits very near the wrecks, and directly across the York River from Gloucester Point and VIMS.

“During the first trip,” says Niebuhr, “we talk about boats, and how they were built in the 18th century. We also learn about the York River ecosystem by conducting simple experiments with currents and turbidity. That helps the students learn that the York is a challenging site for fieldwork, and the difficulties they’ll encounter with both sonar and video imagery if they happen to stir up a bunch of gloop from the bottom.”

During the second lesson, Patterson and Elliott will introduce the students to the robots—two Fetch-class AUVs from the Autonomous Systems Lab at VIMS and a VideoRay ROV (remotely operated vehicle) on loan to the Watermen’s Museum from Marine Sonic Technology.

“The Fetch-class subs are equipped with a suite of high-tech sensors,” says Patterson. “The students will learn about side-scan sonar, high-def video, and sensors for measuring water temperature, salinity, chlorophyll, turbidity, dissolved oxygen, and pH.”

During the third and final lesson, the students will put their knowledge in action by deploying the VideoRay and one of the Fetch AUVs from a command station adjacent to the Watermen’s pier. The students will re-survey the wrecks on an ongoing basis, and record their condition using side-scan sonar, and when visibility permits, high-definition video.

“We’re going to let them fly the technology and analyze the data,” says Patterson. “In addition to the excitement of working on an actual archeological site, the students will have the opportunity to learn about the marine environment, autonomous underwater vehicles, and the many opportunities for creative problem solving associated with low-visibility, underwater research.”

The Watermen's Museum was founded in 1981 as part of the 200th anniversary of the Battle of Yorktown. Its goal is to recognize the heritage of commercial fishermen and other nautical workers in Chesapeake Bay. The Museum offers numerous hands-on educational activities, including a boat-building program in which local schoolchildren construct historically accurate watercraft using traditional techniques. The Cornwallis project is the museum’s first partnership with VIMS.

For Patterson, the project is the latest in a series of outreach activities that involve students in marine robotics, including VIMS’ Marine Science Day, the International RoboBoat Competition, Project SeaCAMEL, and the JASON XI Expedition. He received a "Teaching with Technology" award from the State Council of Higher Education for Virginia in 2010, for a "record of superior accomplishment in the use of innovative educational/instructional technologies" for instruction.