For many anglers, the whole point of fishing is to catch the biggest fish—whether it’s for the bragging rights or the frying pan.

For the last three weeks, an international group of 16 fisheries students has reversed this traditional piscatorial pursuit, focusing their attention on the smallest of the small—the eggs, larvae, and juveniles of 180 different fish families.

The students came to the Virginia Institute of Marine Science from as far afield as Alabama, California, Florida, Illinois, New Jersey, New Zealand, and Maryland for an intensive graduate-level lecture and laboratory course on the early life stages of fishes. A group of six students from the College of William & Mary’s School of Marine Science at VIMS also took part.

The course was taught by a quartet of leading experts in fish development, classification, and ecology—Drs. Nalani Schnell and Troy Tuckey of VIMS, professor Ed Houde of the University of Maryland Center for Environmental Science, and Dr. G. David Johnson of the Division of Fishes at the Smithsonian’s National Museum of Natural History.

“The early life stages of fishes are key components of aquatic ecosystems,” says Schnell, a post-doctoral research associate at VIMS. “Eggs, larvae, and their survivors represent the level of a species’ reproductive success, and are an important link in aquatic ecosystems and food webs.”

Houde says “Studying early life stages helps researchers and fishery managers determine the effects of the environment on reproductive success and gauge the strength of a year class. The small size, dynamic growth and mortality rates, and close dependence on ambient environmental conditions make the early life stages very vulnerable to climate variability and other stressors.”

Alison Deary, a PhD student at VIMS, took the course to help in her dissertation research on the development of feeding structures in drum, croaker, spot, and other related species. These are members of the sciaenid family, recreationally important fishes in Chesapeake Bay. 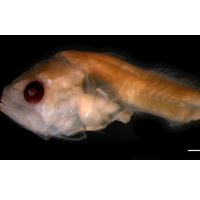 “I wanted to acquire the skills and techniques needed to identify the larvae not only of sciaenids but of other fishes,” says Deary. “It’s one thing to read a book, but it’s better to get hands-on instruction on what kind of characters to look for, where to start when you get an unsorted sample—where to begin in the identification.”

Sarah Privoznik, a researcher with NOAA’s Southeast Fisheries Science Center in Miami, says “One of the most incredible statistics we learned was that the mortality rate from egg to adult is greater than 99.5%. It makes you realize how important it is to manage spawning areas, not just areas where adults are being caught.”

The teachers and students agree that the course was both exhaustive and exhausting. The class met six days per week, with Houde providing a morning lecture and Schnell leading an afternoon lab. Evaluation was based on a 3-hour written exam on the biology, ecology, and dynamics of early life stages, plus a 2-hour practicum in which each student used a microscope to identify the eggs, larvae, or juvenile form of 30 different fish families.

“It was a lot of work,” says Privoznik.

Jessica Luo, a PhD student at the University of Miami’s Rosenstiel School of Marine and Atmospheric Sciences, says “Having this type of intensive course was the only way that people like us from other institutions could participate and make use of the resources at VIMS. We could not have come for a semester-long class. The intensive 3-week course made it possible.”

The course was originally developed by Houde and the late VIMS professor John Olney, who had co-taught the material five times previously at locations up and down the U.S. East Coast. Schnell and Johnson have prepared Olney’s invaluable lecture notes for publication as a book, which they expect to be released next fall.

Based on feedback from previous courses, the instructors this year added several labs on fish aging and diet, which were taught by marine scientist Troy Tuckey. He is actively involved in several research and monitoring programs at VIMS that count annual and daily rings in ear-bone otoliths to determine the age and population structure of different fish species and examine stomach contents to shed light on the fishes’ diets.
Diversity

The participants agreed that the diversity of the course—both fish and human—was one of its strong points.

Schnell says her favorite thing was that the students “came from different labs and contributed with their experience to our course. This created a unique atmosphere.” Luo adds: “The participants brought a diversity of cultural and research experience from different areas of the world. That really made the course very valuable.”

Deary says she “liked looking at the diversity of the larvae.  I never expected to see so many differences.” Privoznik adds “Some of the transformations the larvae undergo as they mature into adults are pretty amazing.” 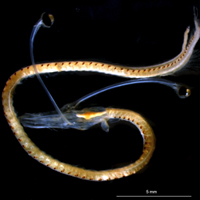 The students and researchers will now bring their newly gained knowledge back to their own institutions and waters.

Deary will apply her enhanced skills to her graduate research and the Ingress Project at VIMS, which aims to better understand the migration of larvae from commercially and recreationally important species from coastal waters into Chesapeake Bay.

Luo is scheduled to identify deep-sea fishes on a series of upcoming expeditions to the northern Gulf of Mexico as part of NOAA’s assessment of last year’s Deepwater Horizon oil spill.

Privoznik will continue to identify larvae taken from plankton tows in the Gulf of Mexico and Caribbean, with the goal of better understanding how they are distributed by currents, and how populations are connected, with an eye toward choosing the best sites for Marine Protected Areas.

“We really had a wonderful time," says Privoznik. “Ed and Nalani put all this together and were working just as hard as we were. They were great—very accommodating for anything we needed and good at answering any questions we had. It was a really great experience and I learned a lot.”

Luo says “I’m really encouraged by the fact that this seems to be a field that’s growing. There seems to be a lot of interest in early life history of fishes. We’re seeing a convergence between the ecology and the fisheries science in this field. I think that is really great and very important.”