Photo - of -
by Jim Ducibella |  May 23, 2011
William & Mary and several of its alumni played prominent roles in the rousing success of the first-ever Run for the Dream weekend of races May 21-22.

Former track star Sonja Friend-Uhl ’93 finished second in the Masters class 8-kilometer race on Saturday, May 21, while Jason Schoener ’07 finished second in the men’s half marathon the following day. Both races started in front of Phi Beta Kappa Hall, wound through campus and Colonial Williamsburg, and finished inside Zable Stadium.

“I love coming back here,” Friend-Uhl said. “Running on this campus and through Williamsburg is such a great venue. There’s such a great running community here that it’s just perfect.”

Schoener, who graduated from dental school at Virginia Commonwealth University the previous day, called it a “unique” feeling to come back to town and participate in an event two years in the planning.

“My first practice at William & Mary, I ran with five guys on a loop of the (Colonial) Parkway,” he said. “I just remember that it was really, really hot that day. It was nice to come back and run the parkway again without worrying about dying.” 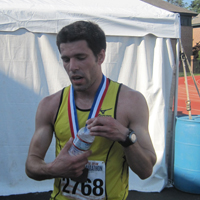 More than 4,200 people participated in the 5K walk, the 8K race, and the half marathon. Thousands more accompanied them, filling hotel rooms, restaurants, and thoroughly enjoying the post-race beer, barbecue and music each day in the Sunken Garden.

On the track, the weekend’s biggest winners were men Mbarak Hussein (8K) and Matt Kroetch (half marathon) and women Chris Kimbrough (8K) and Kristin Herring (half marathon).

Hussein, a 46-year-old Kenyan marathon star, set a pending world record in the Masters 8K Saturday with a time of 24:40 – one second faster than the previous world record set by Bill Rodgers in 1993.

“Races like today are extra motivation for me,” said Hussein. “They keep me going. I saw guys 50-something and 60-something right behind me. It was a motivating time for me.”

Friend-Uhl and eventual winner Chris Kimbrough ran side-by-side for the first two miles before the Tribe alumna fell off the pace. She has been suffering severe allergy problems since moving to Nashville, Tenn., though she also suspects an iron deficiency that she will have investigated when she returns home.

“I’m frustrated,” she said. “I wanted to win, but I also wanted to finish strong. It’s no fun to race when you feel weakened. After mile two, it was a battle not to stop. From there to the end it was a battle all the way.”

Schoener was outgunned by the possessor of the weekend’s most bizarre story, Virginia Tech alumni Matt Kroetch of Northern Virginia. Kroetch arrived in Williamsburg late Saturday night and talked his way into the race Sunday morning even though he missed the registration deadline and was three dollars short of paying the $80 entry fee.

Quickly, however, Kroetch had opened such a commanding lead that it was clear the race was his. He won the 13.1-mile race by more than four minutes.

“I was hoping there would be someone to run with,” Kroetch said. “But after the first mile, I realized there was no one around.”

Had he been in better condition, Schoener said, he could have given Kroetch more of a challenge. But a slew of injuries have so curtailed his training that Sunday’s race was the furthest he’d run since December.

Now in the Air Force, Schoener is on his way to Alabama for four weeks of training before assuming his duty at Fort Travis in Fairfield, Calif.

Meanwhile, it will take some time for race officials to tally how much money was raised in support of Wounded Warriors and An Achievable Dream. But it won’t be long before plans are laid for the 2012 race, and it won’t be easy staging an event that ran as smoothly as the one just completed.

“We’re perfectionists at what we do, and we’re very critical of our own performance,” said Dave McGillivray, whose company runs the Boston Marathon and was called in to guide first time race director Kelly Cannon ‘05. “But everything seemed to come together – the weather, community support. From what I’m hearing from the runners, they’re pleased with the event.”

Achievable Dream founder and CEO Walter Segaloff beamed when asked for his evaluation of the weekend.