The College is honored to be the sixteenth Sultan Qaboos professorship established at leading universities around the world.

Other recipients include Leiden University, Holland, with whom the College has a long-established faculty-exchange program; Peking University, Tokyo University, and the University of Melbourne; Oxford and Cambridge universities; and, in the United States, Harvard and Georgetown universities.

The fully funded, endowed professorship will “encourage the depth and breadth of international education across the broad range of subjects encompassed by the study of Middle East Studies” and will help support the faculty’s wide-ranging teaching and research on aspects of Middle Eastern culture. The position caps this fall’s introduction of the newly designed, multidisciplinary Asian and Middle Eastern Studies Program.

“This professorship will make an enormous contribution to the College’s ongoing efforts to promote greater international knowledge and understanding,” said Stephen Hanson, Vice Provost for International Affairs and Director of the Reves Center for International Studies. “We are truly grateful to His Majesty the Sultan for this generous gift to Middle Eastern studies, which will do so much to deepen our students’ understanding of the history and culture of this crucial world region.” 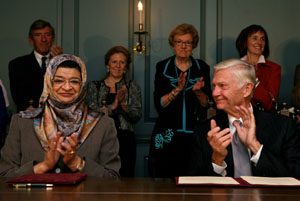 A true celebration of culture and history, the event honored the rich past and focus on education shared by the Sultanate of Oman and the College.

“It is indeed a great honor to be here at the College of William and Mary,” said Her Excellency Dr. Rawiyah bint Saud al-Busaidiyah, Minister of Higher Education. “It is in keeping with the values and traditions [of the College] and to honor the historic legacy of His Majesty Sultan Qaboos that the Sultan of Oman has endowed this professorship.”

At a formal ceremony in the Blue Room of the College’s Wren Building, William and Mary President Taylor Reveley and Minister al-Busaidiyah signed the agreement to establish the professorship.

Shortly thereafter they were greeted with a jubilant declaration by the W&M Faculty Brass Quintet, led by Director of Bands Paul Bhasin, performing the “Fanfare for His Majesty Sultan Qaboos bin Said,” composed by Music Professor Greg Bowers for the occasion. A signed, commemorative score of the composition was later presented to Minister al-Busaidiyah.

A celebration luncheon was then enjoyed in the Great Hall. 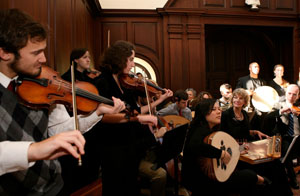 “This can be looked upon as only the beginning of closer ties in education and research and a lasting friendship based on knowledge and understanding,” said Her Excellency Hunaina Sultan al-Mughairy, Ambassador to the United States.

At the luncheon, the W&M Middle Eastern Music Ensemble performed “Batal al-Bab (Unlock the Door)” and “Tawasal al-Hidhari (The Persistence of Civilization),” both pieces from Oman. Professor Anne K. Rasmussen, who directs the ensemble, noted the event’s performance included Omani music played on traditional instruments – a first for the United States. Rasmussen learned the Omani pieces during recent trips to Oman as the Sultan Qaboos Cultural Center Research Fellow. 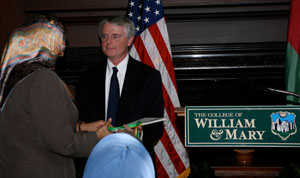 “This gift is simply marvelous,” Reveley said at the event. “Today, we celebrate the Sultan’s commitment to higher education and our mutual efforts to enhance and extend global cultural heritage for the benefit of all peoples. William & Mary is enormously grateful for the Sultan’s transformative generosity. We look forward to the continuing achievements of our faculty and students in the important area of Middle Eastern studies.”