Christie S. Warren has returned to William & Mary Law School after spending a year assisting the United Nations in mediating peace processes in Darfur, Kyrgyzstan, and Somalia, among other places. Warren resumes her appointment as Professor of the Practice of International and Comparative Law and is the founding Director of the Program in Comparative Legal Studies and Post-Conflict Peacebuilding, a program designed to bridge the gap between resources available at academic institutions and the need for them in the field.

For a 12-month term, Warren was the Senior Mediation Expert in Constitutional Issues for the UN’s Mediation Support Standby Team, a five-person team that deploys members on very short notice to assist UN mediators globally, or to provide "short-order" advice or analysis.  The Standby Team serves peacekeeping missions, UN Resident Coordinators and regional organizations. It functions as a resource for the UN system broadly in classic peacemaking contexts, preventive diplomacy, and other settings requiring mediation expertise.  The Mediation Support Standby Team is one element of the Mediation Support Unit, which is part of the Department of Political Affairs for the United Nations.

As the Senior Expert in Constitutional Issues, Warren provided technical expertise, mediation support and advice on constitution-making and transitional institutional arrangements as well as expertise on the design, planning and management of negotiation frameworks, including promoting the inclusion of women. She also helped draft documents supporting peace agreements.   “The Standby Team is deployed at very high levels,” she notes.  “We weren’t deployed anywhere unless there was a request for us from a head of state or a Special Representative to the Secretary General of the UN. Because of this, we had access to the people we needed to consult with to complete our assignments. 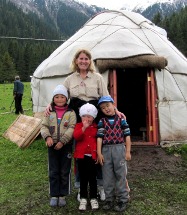 “The modern theory of post-conflict constitution building relies heavily on consultative processes since participation by people engaged in conflict helps bridge the gap between conflict and peace,” Warren explains.  “We bring conflicting groups together to work on a new vision for their country.  As part of the consultative process, constitutional experts provide comparative examples of how people in other countries have addressed similar issues and solved similar problems when transitioning from conflict to peace.  Local actors then make constitutional choices based on their assessment of what will work in their particular situation. The result is a constitution that meets international standards but is the product of local discussions and choices.”

When she was not deployed in the field, Warren completed analytical assignments with the assistance of three research assistants, William & Mary Law School students Mary Rude, Eve Grina and Arya Hariharan.  “My research assistants produced comparative charts, graphs, tables and case studies that can be used by the Department of Political Affairs for many years,” says Warren. “I wouldn’t have been able to successfully complete this year without their help.”

Warren says the year was very intense.  “I began my term in February 2010 and within a week I received my first deployment.  I was sent to Doha to participate in the Darfur peace talks.  I expected to be there two weeks, but we were asked to stay for over a month.  Our job was to assist the Joint African Union – United Nations Mediator in his efforts to mediate the conflict between rebel groups and the Government of Sudan.

“One of our tasks in Doha,” Warren continues, “was to plan and deliver training programs for the rebel groups so they could better focus their negotiation strategies.  The situation in Darfur has changed so much in the years since the conflict began that some natural resources, for example, that parties may have negotiated for a year ago may no longer exist.  We facilitated discussions about which mediation outcomes might be possible now.” Her team also assisted in drafting ceasefire documents, one of which was signed while they were in Doha. 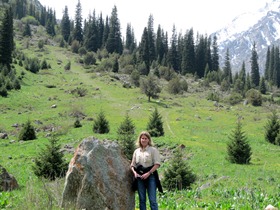 She and other Standby Team members were then sent to Kyrgyzstan to provide recommendations to the SRSG on national reconciliation strategies following the April 2010 popular uprising.  “We spent a great deal of time traveling around the country talking to people about sources of tensions and trying to assess how peace might take root.”   The week after the Standby Team left southern Kyrgyzstan, violence erupted in the region, leaving hundreds dead.

Despite the volatile situations into which she was sent, Warren says she never feared for her safety.  “Before we’re allowed to start our standby year we take two comprehensive security courses—a basic and an advanced security course.   I never felt that I was physically in danger.”

After a brief assignment in Senegal to assist the UN Office of West Africa in setting up a regional mediation unit,

During her term, Warren was also sent to Moldova, at the request of the Interim President, to provide assistance interpreting provisions of the Constitution that impacted elections.

Other assignments included an analysis of potential constitutional impediments to the North-South referendum in Sudan that was scheduled for early January. 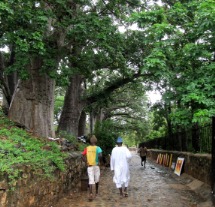 Warren says her year as a Standby Team member provided the most rewarding work of her professional career.  “Being deployed to assist with high-level mediation efforts that are of immediate concern to the international community is an experience I will always value.  I learned so much from each of my deployments.  Even the way I think about my own field, post-conflict reconstruction, has changed as a result of this year.”

Warren notes she was one of two female members of the Standby Team.  “In many situations I was one of the only women at the table. When I was organizing a training program for the Darfur rebels, for example, I met with several female rebel leaders; they were very interested in the fact that I was leading these training programs. I asked them why they weren’t participating; they said they had not felt that the atmosphere was welcoming to them as women. I encouraged them to come so that women would have a voice in the peace process, and they ended up attending the remainder of the sessions.  I don’t think they would have come if there hadn’t been a woman there. It makes a difference when women who are marginalized see another woman in a leadership position.”

Warren is careful to note that no single person is responsible for successful mediation efforts. “I am a strong believer in the concept of the Standby Team as an aid to mediation,” she says. “Because we are neutral, short-term experts whose job is to provide specific technical assistance, we are able to offer credible expertise that can contribute to peace processes. Mediation, in which common ground and larger interests between conflicting parties are explored, is critically important in the world today as a peace-building strategy. Many of these conflicts are longstanding and span across generations. They can’t be resolved overnight by any one person. Members of mediation teams cannot be egocentric, bent on making international reputations for themselves. Each team member has to do his or her best to nudge the ball forward. If you can do that, you are doing your part.

“There are so many people who have died in these conflicts,” she concludes. “It is their sacrifices that deserve to be remembered.”