William & Mary History professor Hiroshi Kitamura envisions a day when Americans care less about how fast they eat and more about how their food was processed, the ingredients it contains, and sharing their meal with family and friends.

Actually, there are pockets in the world that already espouse such a philosophy, and Kitamura and three students recently spent 12 days in Italy examining the growing Slow Food phenomenon.

The four used the town of Parma as their base of operations, though they also visited Pavia and Genoa.

Some of the highlights of their trip:

•    Visited two producers of Parmigiano-Reggiano cheese, including internationally known manufacturer Bertinelli;
•    Visited a producer of prosciutto di Parma ham;
•    Visited a producer of extra virgin olive oil and participating in a tasting;
•    Visited the Barilla plant in Parma, the largest pasta factory in Italy;
•    Visited two organic wineries, Carra di Cassatico and Ca Boffenisio;
•    Witnessed pesto Genovese being made in a special demonstration for Kitamura and students at Zeffirino in Genoa;
•    Learned how to make grissini, pasta, saltimbocca, and ragu in a cooking seminar taught by Kitamura’s mother, Mitsuyo Kitamura, an internationally acclaimed food scholar and cultural critic who lives in Japan. 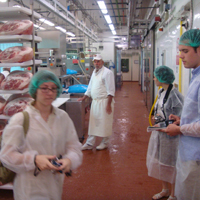 “We don’t know where the food comes from when we buy in supermarket,” he said. “We don’t know who’s making it, and we just get a bare sort of look at the ingredients. We don’t know about the place, people or culture. Going back to the producers is a very valuable effort to reconnect with the production side of things.”

Alexandra Taylor ’11 said the kindness and openness of the Italian people made the trip immensely educational.

“We were welcomed into the homes and workplaces of a number of different people, who all shared a love for traditional food culture and went out of their way to impart their knowledge to us,” she said. “This communication reinforced for me the importance of personal contact where food is concerned. We learned things from them you couldn’t find on the Internet.”

Added fellow traveler David St. John ’12: “From wineries to Parmigiano-Reggiano cheese, to basil pesto, every artisan we met with was singularly devoted to creating and selling as superior a product as possible, in spite of the extra costs involved in both time and money.”

Kitamura explained that the Slow Food movement began in Italy in the 1980s in response to the industrialized, fast -food culture espoused in the United States and gaining traction throughout the rest of the world.

That’s not a positive development, for it is a lifestyle that attempts to maximize profit and cut costs, to the detriment of food quality. It is a major component of the obesity epidemic ravaging the U.S. and also making inroads in places such as China and Japan.

“Think about the fast -food culture created by McDonald’s,” Kitamura said. “People’s lifestyles have been adapted to that whole industrialized way of life. People spend less time with family, no time making food. They don’t enjoy eating well as a community. They see food as sort of a means to a different end, which might be work, play, whatever.

"Slow food offers us a useful opportunity to rethink our lifestyle that has been altered by fast-food culture."

St. John said the lesson that stood out for him was the admission by Italian producers that American importers couldn’t have cared less about their product.

“Many of the producers spoke of the trouble they had selling into the American market, primarily the challenge of finding reliable importers who would respect the quality of their products and provide them with a fair price,” he said. “Many said that price was all that mattered to most importers, not quality.”

“Italy has over 300 different microclimates, which means that they have a comparable number of different types of olive oil,” she explained. “By comparison, Spain has about eight. Mitsuyo taught us to always match your oil with the region from which you are cooking, or you may get a completely different result.

“Learning this solidified for me how various and localized Italian cuisine can be, a fact all too often overlooked in America. It also stresses how important it is to know the history and tradition behind your food, and to give each component the attention it deserves.”

All of the students already possessed an interest in Slow Food and eating and cooking more of it by buying from local farmer’s markets and adapting their diets to consuming foods during their natural seasons.

"However, tasting local foods at the source and speaking with producers clearly dedicated to the 'Slow Food' movemewnt made a deep impression, and moved me to a stronger stance on the importance of these foods," said Kayla Grant '13. "Seeing the staggering amount of thought, care and effort involved in production, and actually tasting the difference between organic/non-organic, local/imported (especially after returning home and sampling store-bought prosciutto after the freshly sliced stuff at a factory in Parma) truly brought the slow-food philosophy into sharp relief.

"While I always knew that such foods were better for the planet, I never before realized what a powerful argument taste could be; perhaps the pleasure factor could even persuade those with fewer environmentalist leanings to convert to organic."

After returning from Italy, Taylor is convinced that the College can take a more active role in promoting and catering to this lifestyle.

“The cafeteria system has made progress over the past few years,” she said. “We have so many great resources in Williamsburg that are immediately accessible to students: the RealFood Community Co-Op, and the Farmer’s Market provide local produce, dairy, and meat on a weekly basis. ‘Off the Vine’ market offers a special Community Supported Agriculture (CSA) membership for students every semester. 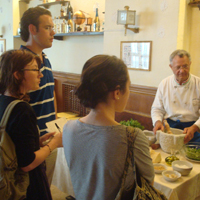 “On our trip we tried to find the best local ingredients and alter them as little as possible. Often this required little to no cooking, which is perfect if you live on-campus and don’t have your own kitchen.”

St. John would love to see a Slow Food program blossom at W&M.