Someday soon, perhaps, Ian Kingsbury can regale an 18-year-old cancer survivor with the story of how his love for pizza saved her life.

Kingsbury ’13 stopped in the Sadler Center for a bone marrow screening last April. The organization sponsoring William & Mary’s bone-marrow donation drive – the largest student-run campus drive in the nation – was offering free pizza to anyone who took the time to have the inside of their cheek swabbed. That’s the standard method of data collection. 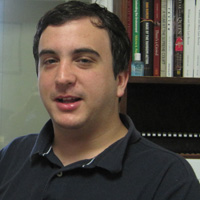 “To be honest, I went in for the pizza,” Kingsbury said. “My roommate was in this fraternity, and he was outside (Sadler) and he encouraged me to go inside. I knew the chances for actually being selected to be a donor were pretty astronomically low. So to be honest, I went in thinking there was no chance I would ever be called upon to do such a thing.”

But in May, Kingsbury was called. Preliminary tests showed that he was a match for a teenager with cancer. Additional tests proved he was a perfect match. According to the National Marrow Donor Program, which places all donors’ names into the “Be the Match” registry, the odds of matching marrow run from 66 percent to 93 percent, depending on race and ethnicity.

“I’m not someone who’s done a lot of charity work or who has given a lot back,” Kingsbury said. “But, obviously, when I found out that I was selected I felt that I had a mission that I was called upon. There’s no way that I could have the opportunity to save a 17-year-old girl and say no, not under any condition.”

Last July, he traveled home to Boston for the surgery. Doctors made four small incisions in his lower back-hip area and stuck a hollow needle inside, chipped into his hipbone to extract the marrow. Immediately after harvesting, the marrow was sent by special courier to the girl’s location, which is being kept a secret.

Kingsbury won’t know anything else that happened until July 2012, a year from the surgery. Then, if both parties agree, they will have the opportunity to meet, and Kingsbury can tell her the amazing story they share.

Although the description of the procedure sounds gruesome and painful, Kingsbury wants you to know that it wasn’t.

“I don’t think I have a high tolerance for pain,” he said. “It really was not a painful surgery.”

Kingsbury’s procedure went so smoothly that he was released from the hospital the same day. Most donors spend a night. He walked with the help of a cane for a couple of days. Doctors gave him a prescription painkiller; he didn’t take it.

“I think the pain factor is one of the misconceptions I’d like to help clear up for people,” Kingsbury said. “Now that I’ve had this experience, I’d like to get more involved.”

William & Mary will provide Kingsbury with plenty of opportunities. The College’s involvement in seeking bone-marrow donors began in 1991 as a way to find a potential match for a professor on campus. It intensified when Jay Bukzin ’94 began searching for a match for his brother, Alan.

Since then, the College’s bone-marrow program has been a model for colleges and universities across the nation. In November at a conference in Minneapolis, William & Mary will be presented with the National Marrow Donor Program Collegiate Award – the only school so honored.

“The amount of people we put in the registry each year is huge,” said Pat Horan ’12, who will accept the award on behalf of the College. “The goal is to get enough people in the registry that anyone who needs a transplant can find a match.” 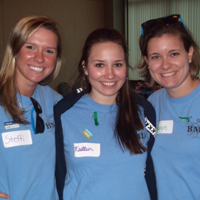 Horan and a steering committee of about 20 oversee a rigorous, yearlong campaign to add names to the registry. Recently they held a 5K race that raised about $1,500. On Nov. 14, they’ll hold the annual silent auction – “a wine and cheese-type thing,” Horan says – in which donations from local restaurants and businesses, a W&M meal plan, W&M parking pass, extra tickets to Commencement are bid on, with all of the proceeds going to the cause.

On Charter Day in February, they’ll hold a gala. In March, they will stage the annual “Mr. William & Mary” pageant. On April 10, they’ll hold the annual golf tournament, one of their largest fund-raisers. Three days later comes the annual one-day donor drive, an event that may draw as many as 100 W&M volunteers.

“It costs almost $100 to get someone registered into the national registry; we do that completely for free.” Horan said. “Last year, we entered over 600 people in the registry. Some years, it’s been over 1,000. We’ve raised hundreds of thousands of dollars over the 20-plus years we’ve been involved – and we’re still raising money.”

And awareness of what the program is all about. Kingsbury is willing to help.

“I feel like most people are going to be like me and say ‘the chances of me getting selected are so small that there’s no point in doing it,’” Kingsbury said. “But maybe if they’ve met someone -- another student -- who has been selected, maybe they’ll realize that it’s worth their time to sign up and that it is really important.”