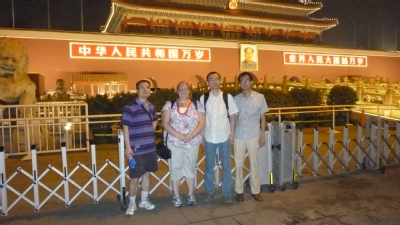 Bronwen Watts wears many hats on the William & Mary campus: the membership manager of the Muscarelle Museum, a graduate student in the School of Education’s Educational Policy, Planning and Leadership (EPPL) program and an intern at the Reves Center for International Studies. In  her internship, Watts is investigating extended international student orientations, so she also volunteers as a peer leader at the Reves Center international orientations.

Like all peer leaders, last spring Watts was given information on the students she will be supporting in the fall. She sent an email welcoming the group and mentioned her interest in travel, sharing that she was particularly excited about an upcoming trip to China. Several incoming Chinese students responded with offers to meet her.

At the time, Watts planned to travel as part of a summer global-studies course, but the enrollment was not high enough and the course was cancelled. Rather than call off her trip, Watts worked with Dr. Pam Eddy of the School of Education to create an independent study investigating higher education in China. She traveled with a group of Virginia teachers from the School-University Research Network (SURN) led by Executive Director Dr. Jan Rozelle and spent two weeks in June and July touring Beijing, Xi’an and Shanghai.

When a visiting scholar in the School of Education, Aimin Li, heard of her plans to conduct independent research in China, he suggested several contacts who might be able to show her around. Watts arrived in Beijing several days before the rest of the group and met Qing Yang, an incoming William & Mary graduate student who will be in her international orientation group. He arranged for her to speak with several current Chinese students about their studies and university life, and for them to act as guides to some of Beijing’s universities.

Watts was also able to tour a number of institutions with student guides arranged by Li and his contacts, as well as meet with Chinese faculty to learn more about college operations. By the time she left the city, Watts had explored Beihang University, many of the institutes of the Graduate University of Chinese Academy of Sciences, Beijing Normal University, Renmin University, Beijing Foreign Studies University, Peking University and Tsinghua University.

“I believe I got a much better overview of higher education in China and of universities there than I would have had I gone by myself,” says Watts. “Visiting some of the campuses by myself would not have been an option, and I probably would have been unable to get into some of the classroom buildings as well.”

“It is important for graduate students to have experiences studying abroad, as many of these students are leaders of educational institutions," she said. "In these roles, individuals can influence a broad range of opportunities for students that help create global competencies across the educational continuum. The fast pace of change in the world requires students to have an expanded skills base. International travel adds a critical element of adaptability to face these changes.”