History had the last word.

For the unfamiliar, the Raft Debate began at William & Mary in the 1900s, was abandoned for a time then made a triumphant return in the last decade. Four professors are stranded on a desert island with a raft just large enough for one person to escape back to civilization. Which one most deserves to go? The four debate their worthiness – or their opponents’ lack of same – after which the audience inside the Sadler Center decides the winner with applause.

Dean of Graduate Studies and Research Laurie Sanderson served in the ceremonial role of “judge.”

Score one for the guy with the grungy fake beard, tattered sport coat, shredded pants – and razor-sharp wit. Feigning disappointment that Sanderson stuck him in the social sciences camp – “I thought I’d be defending the humanities . . . I always thought of history as a humanistic discipline” – Fisher lampooned them all. But he saved his harshest remarks for science.

“Chemistry, physics, microbiology do things because they can before thinking about whether they should,” Fisher began. “They get carried away with their own cleverness and we get stuck with stuff like atomic bombs, DDT and the Zombie Apocalypse.

“There’s a reason the villain in the movies is always a scientist. Scientists have a long and well-deserved reputation for delusions of grandeur. How many movies have you seen featuring a mad historian?”

Leemis conjured up the founding fathers and time travel in making the case that science has achieved more the last 200 years than its competition. Introduce George Washington, Thomas Jefferson and James Madison to today’s politicians. Would they be impressed? Take them to a gallery of modern art and ask them to compare what they found to the traditional artwork in the Muscarelle. Would they be impressed?

Now grab Ben Franklin and bring him to campus. Show him a heating and air-conditioning unit. A refrigerator. Bring him to the Sunken Garden, open a laptop, type his name and tell him that a Wikipedia page was floating through the air toward them. 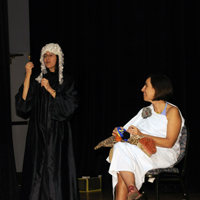 “He’d like that,” Leemis predicted. “He’d be floored at how far we’ve progressed.”

Dressed in a toga, Panoussi argued that the humanities produce the most well-rounded individuals. Her discipline has been responsible for the alphabet, art, music, debate, the Socratic method.

“Technology is boring without art. . . . For those who say you won’t earn a lot of money (working) in the humanities, I have two, maybe three, words for you – J.K. Rowling.

“She was a classics major.”

Eddy threw up a pie chart she said represented an average week in the life of a college student. Nine percent of the time is spent in the classroom, 33 percent in bed – not necessarily sleeping, she quickly added – and 58 percent was spent “doing life.”

“You’re taking what may have been germs of ideas in the classroom and applying them to life,” she said, before launching into some of the “life lessons” her children have learned during college.

She then made a startling recommendation and oblique homage to “Gilligan’s Island.” She was voting for Ginger – Ginger Ambler.

“She is going to be the person that’s going to get us started again,” said Eddy, referring to the College’s vice president for student affairs. “She’s going to know the social life.”

The crowd wasn’t buying it. But Fisher was a different story.