Reynolds’s presentation is free and the public is invited to attend.

Reynolds, the author, editor or co-editor of 14 books on 19th century America, is a Distinguished Professor of English and American Studies at the Graduate Center of the City University of New York. He is a regular contributor to the New York Times Book Review, and has appeared on such shows as National Public Radio’s “Fresh Air,” C-Span’s “After Words,” Brian Lamb’s “Book Notes” and “The Diane Rehm Show.”

Stowe’s book is credited with helping to start the conflict. While southerners were appalled at the fictional portrayal of slavery, many northerners believed there was an underlying truth to the work. The novel helped to create a climate in which the Whig party declined and the antislavery Republican Party won the presidential election of 1860. 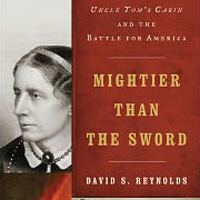 “For many years, ‘Uncle Tom’s Cabin’ was deemed unworthy of literary study by critics who claimed that the novel lacked subtlety and complex artistry, that its message was too political, its characters too flat,” said Beverly Peterson, visiting associate professor of English at the College. “Now the novel is a staple of interdisciplinary college courses that teach students to read literary texts in their cultural context.”

Peterson adds that Reynolds’s book “makes a compelling case that ‘Gone With the Wind’ and ‘Birth of a Nation’ fall into the category of anti-Tom responses.”

Among Reynolds’s numerous awards, three of his books have been chosen by The New York Times as “Notable Books of the Year”: “Waking Giant: America in the Age of Jackson” (2008), “Walt Whitman's America,” (1995), and “Beneath the American Renaissance” (1988).