A life of public service can be difficult and hard on one’s finances, but its rewards far outweigh those of a life lived for material gain, James B. Comey told students, faculty, alumni and community members at the College of William and Mary’s Phi Beta Kappa Hall on Feb. 9.

“It would be an awful thing to get to the end of this short life and realize you have accumulated the smoke of success, but nothing of real value,” said Comey. “Service offers rewards that can’t be banked but that sure make you feel rich at the end of every long day.”

Comey, a former U.S. deputy attorney general and a member of the College’s Class of 1982, was the keynote speaker at the College’s annual Charter Day ceremony. This year’s ceremony marked the 315th anniversary of the awarding of the royal charter from King William III and Queen Mary II of Great Britain establishing the College. College Chancellor and former U.S. Supreme Court Justice Sandra Day O’Connor was also part of Saturday’s ceremony and welcomed those in attendance at Phi Beta Kappa. In her greetings, O’Connor spoke of her pride in being associated with William and Mary.

“There’s no more interesting college in the United States,” she said. “And no better one.”

During his remarks, Comey offered two lessons from his experiences in public service. He said that those in public service have to learn to say ‘no’ under difficult circumstances. He also said that truly wise people are willing to acknowledge their limitations and concede that they may be wrong. Comey said he learned that lesson at William and Mary through professors who made him and his fellow students listen to each other and consider different points of view while supporting their positions.

“William and Mary trains a young mind to think broadly, reason tightly, and never forget that someone else might have the better of it,” Comey said. “I can’t tell you how valuable that lesson has been in public service.”

In closing, Comey challenged the students in the audience to pursue a life of public service, citing the need for teachers, engineers, doctors, layers and more around the world. 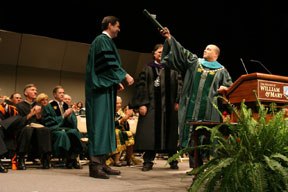 Earlier in the ceremony, College Provost Geoff Feiss read an excerpt from the College’s Charter, and College President Gene R. Nichol and Rector Michael K. Powell acknowledged several members of the College community for their work and contributions at the College and around the world.

Four other alumni were also recognized during the ceremony as the recipients of this year’s Alumni Medallions. Linda Beerbower Burke (’70), Randall S. Hawthorne (’67, J.D. ’70, M.L.T. ’71), Suzann Wilson Matthews (’71) and Patrisia Bayliss Owens (’62) received the medallions from the William and Mary Alumni Association for their professional accomplishments, leadership, dedication to the community, and commitment to the College.

Nichol remarked on the accomplishments of all those who were acknowledged in the ceremony, calling them “exceptional” and representative of William and Mary as a whole.

“We claim, immodestly, that they represent us well—parts of a whole we would not believe if we did not know it and live it. Women and men ‘acting,’ as its written, ‘in the living present,’” he said.

As he closed the ceremony, Nichol cited the work and accomplishments of various College students, faculty, staff and alumni and asked the audience to look to those examples for inspiration as they take Comey’s words to heart and seek to make a difference in the world.

“They have joined their hearts and hands to the world,” said Nichol. “Making their mark. Calling us to consider our own. Inviting us to begin anew here, where one can make a difference —where we are all called, unmistakably — to make a difference, a difference that will last, inscribed upon each others’ lives, now, tomorrow, and for all time coming.”