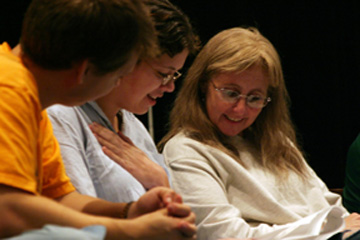 One hard-and-fast rule exists for writers bringing their works in progress for readings in the Playwrights’ Playground: no excuses.

“Apologies are left at the door,” says Laurie Wolf, assistant professor of theatre, speech and dance, who serves partially as director, as encourager and, yes, even as occasional reader for the writers, actors and others drawn together on Sunday afternoons to give first scrutiny to creative pieces featuring “Shakespearean Donkey Kongs” and “Homeless Latino Defenders of the Rich.”

Indeed, as far as subject matter, almost anything goes. “The only thing the writers cannot do is come into the Playground and say, ‘I’m not sure this is any good,’” Wolf says. “If they do that, as a group, we just say ‘stop.’”

The Sunday playgrounds are just that—a place for fun. Authors air out nuggets from scripts they otherwise have been slaving over for weeks as part of Wolf’s playwriting classes. Some ideas are rough; some hit and some miss. All represent creative release, underscored in the banter and the teasing as audience members are cast in parts—“If a ditzy blonde is needed, we have our favorite; the same goes if we need an overly dramatic Southern belle,” says one class member—and as feedback, often accompanied by high-fives and by backslaps, is given.

Ultimately the fun, however, is serious business.

Vito Castelgrande, who is writing a play “mocking the day in history that the world forgot what aesthetics are”—an idea, he admits, that came to him in the shower—says the audience feedback becomes “part of a battle.” An author always “struggles to control what is being created” and, at the same time, “what is being created struggles to control the writer,” he explains.

“Just the way people read things can radically change your character,” he continues. The Playwrights’ Playground, he admits, has led to his own character casualties, but, as a battle, it teaches “the process of writing,” he adds.

Tom Bambara’s idea for the musical he is creating about Barbato, whom he calls his “homeless Spanish superhero,” came out of his summer job selling tickets for trolley tours in Washington, D.C. The work entailed collecting hundreds of dollars on the streets of Georgetown. The money attracted the attention of homeless people, who often would panhandle for a dollar or two. One day, three of them “sort of ganged up” on him. The situation became unpleasant.

“All of a sudden, I look up, and there’s this figure emblazoned in sunlight. He has a black fedora on, he’s wearing a wife-beater (a thin tank top), a black trench coat, combat boots and urban camouflage pants,” Bambara recalls. “Suddenly he just screams, ‘Back, you fiends,’” pointing at the accosters, who scattered. “Then the man says to me, ‘Don’t fear, for I am Barbato, defender of the rich. Do you have any spare change?’” Bambara says.

Turning Barbato into a character has been a struggle—albeit one that Bambara seems to be winning, according to the buzz among his fellow writers. He credits the Sunday sessions: “The forum, having 30 kids come and having so many sundry people giving you feedback on all kinds of different aspects, is incredible. You can definitely read their reactions; if you’re writing comedy and somebody laughs, you can make a note to yourself.”

Chris Boyd, whose work “about a playwriting class writing a play” started out as a joke among his classmates, is perhaps having the most fun with the group. He is taking his third playwriting class at the College, even though he does not envision writing plays professionally. The classes, he says, enable him “to stay in the creative world” at a school “where we all are overcommitted people sometimes.” Injecting his own humorous twist as he passed out his script, he primed his readers by saying that acting out themselves would be their most challenging roles by far. After the reading became a high point of the evening, Boyd’s pleasure was obvious. Yet he, too, continues working: “Every time you have something read, you do feel that something could be changed,” he says. “What you write may not be what comes across. It’s a partnership between those who are reading it and those who are writing it. That’s what theatre is; it’s performance. As much as we’re trained in English to read plays and to analyze them as literature, they’re written to be performed.” 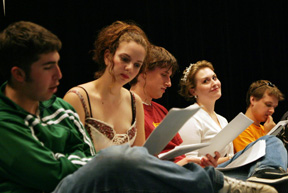 That there is method as well as delight in the madness is perhaps the best way to explain the sudden interest in playwriting that has made the Playwrights’ Playground possible at William and Mary. In past years, only two or three people per semester signed up for the advanced course; this year there are 12. A brand-new third course in extreme playwriting already is filling up for next term. As word gets out, participation at the Sunday forums grows. Charles Albert, whose own play, “Shakespeare’s ‘Othello’ Goes Pop,” is becoming a campus classic, sums up the excitement: “It’s something so fresh and so new, and every week it’s going to be something completely original,” he says. “This is the ground floor—the beginning of how a play becomes famous.”

As for the method, Wolf exudes confidence. After all, it worked previously for her master’s degree students at the University of London. It worked recently for her former student, Andrew Rosendorf, (’03), whose play “The Authorities” was produced last summer as part of the New York International Fringe Festival. If the number of current students who will have a legitimate shot at getting their own works produced professionally becomes an indicator, it will work again, she believes.

“What’s happening is that students are bringing in bits and pieces of their plays as they are being written and getting feedback as they go along,” Wolf explains. “That’s why I wanted to create this playwrights’ forum, where there’s this constant showing of their work with a constant feedback. They get a sense of where they’re going as they write. They dialogue with themselves as they work toward their final projects. They are learning playwriting in progress.”

She enjoys their creative struggles, and she finds satisfaction in watching writers gain confidence as they bring their works out into the public, because “normally writing is such a solitary activity,” she says.

The students obviously “get the method,” but they insist that the professor herself is critical to the process.

“Laurie is fantastic,” says Bambara. “There’s just something about her, some magic that happens. She brings out the best in so many people. She nourishes; she pushes in directions that we need to go.”

Adds Albert, “Her process is very much allowing the student to find his or her muse, and then she helps us develop that.”

“She insists that there be no apologies,” says Boyd, laughing. “Well, at least once everybody has brought apologies. I think, however, that Laurie believes the creative process is a bunch of starts and stops and that what we’re apologizing for now may be the best work we’ve ever written once we sit down and think about it and hear it read.”