The stage in Phi Beta Kappa Hall usually serves as the canvas on which Matthew Allar creates an array of theatrical worlds for William & Mary’s students and patrons to enjoy throughout the year.

But this summer, Allar found himself creating in an entirely different venue: in front of a Hungarian castle. 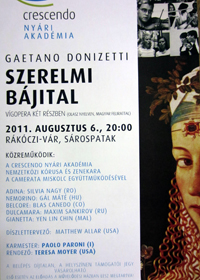 Allar, assistant professor of theatrical design, worked on a production of the Donizetti opera L'elisi d'amore (The Elixir of Love) in the town of Sarospatak in northeast Hungary in July and August.

“It is approximately 3.5 hours, by train from Budapest, the capital of the country and very near the Slovakian border,” said Allar. “The town is located in the Tokaj region of the country which is famous for its world-class vineyards and wineries, at the foot of the Zemplen Mountains.”

Although he was primarily responsible for designing the lighting and the scenery for the opera, Allar said he “contributed to the overall aesthetic look of the show -- as is the tradition in the European art form of scenography, where all of the collaborative artists are working together in a holistic manner.”

Because the opera begins on a farm, Allar and the others who worked on the show decided to integrate the area’s tradition of wine-making into the production, setting it in a vineyard.

“As a result, I was able to meet and work with a local winery, borrowing stage props from their facilities which include cellars hewn out of rock 300 years ago deep within the Zemplen mountains to maintain constant temperatures (before electricity, of course !),” said Allar. “Several local villages were also very willing to lend regionally appropriate antiques for the piece. Meeting these men and women, learning a bit about their lives and working with the artistic team to translate that into an original piece of storytelling is, without question, an experience that I am eager to share with William & Mary students.” 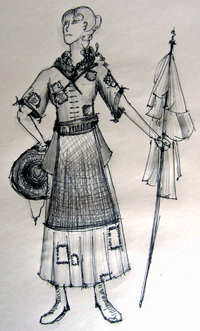 Like Allar, performers and theatre professionals from all over the world -- including other parts of Hungary -- travelled to the country to be part of the opera. For instance, the conductor came from Italy, and some of the principal singers hailed from Romania, Columbia, Russia and Malaysia.

“It is extremely humbling to work on a project that is originally written in Italian, performed for a primarily Hungarian audience, via collaboration with so many individuals from across the world,” said Allar. “Without question, patience and a sense of cultural respect (and a little humor) is critical!

This is the second time that Allar has worked on an opera in Hungary. In 2009, he worked with the same production company, Crescendo Summer Music Institute, on Haydn’s Le Pescatrici, which was also included in the Zempleni Music Festival.

Though 2009’s production was presented in a renovated opera house, this summer’s opera was held outside in front of Rakoczi Castle, which was completed in 1537. Because of the location, a custom stage had to be created for the show. However, the outdoor setting allowed Allar and the rest of those working on the opera to “take advantage of the location's natural acoustic, temperate summer climate (on the bank of the Bodrog River), and larger capacity for audience seating,” Allar said.

“We were informed, by city historians that this was the first known opera to be staged in the castle courtyard in its nearly 500 years of existence,” he added.

Allar said it was very rewarding – both personally and professionally – to work with artists with different backgrounds.

“Professionally, my training is in theatre whereas many individuals in this company have primarily studied classical music, voice, a specific instrument, etc.,” he said. “Being part of the collaboration that produces a piece such as this is something that none of us could ever create alone, or in our native countries.”

Though Allar will soon be back to designing for the William & Mary stage, the benefits of his summer of opera in front of a Hungarian castle are still fresh in his mind.

“It's hard to place a value, personally for me, on opportunities like this,” he said. “They remind you of how diverse the world really is, even in your own subset of professional specialization.”