Some of the top business and government officials from the United States and Spain — including the defense leaders of both countries — gathered at William & Mary on Saturday as part of the 2017 U.S.-Spain Council Forum.

The Sept. 22-23 event included sessions at locations throughout Williamsburg and was brought to the city by U.S. Sen. Timothy M. Kaine (D-VA), who serves as honorary chairman of the council. The group, which aims to strengthen ties between the U.S. and Spain, includes leaders in business, government, education and culture from both countries.

“It’s grand that the 22nd running of the United States-Spain Forum has come to Williamsburg and especially nice for William & Mary that the forum is meeting on our campus today,” said President Taylor Reveley during a luncheon at the Muscarelle Museum of Art Saturday.

That morning, students from the university’s ROTC program and Maj. Dustin A. Menhart, chair of the military science department, had the opportunity to meet and take a photo with U.S. Secretary of Defense James Mattis before he joined María Dolores de Cospedal, Spain’s minister of defense, at William & Mary’s Raymond A. Mason School of Business for a discussion about the future of NATO.

Accompanied by Kaine, Mattis talked to Hayley Burton '19, a public policy major, and Max Sterling '18, an international relations major, about their ROTC activities, including training for the next Ranger Challenge, as well as their futures as U.S. Army officers.

“It was very inspiring,” said Menhart. “He’s just a brilliant man, leader and person, and to hear some of the things he was saying was quite amazing.” 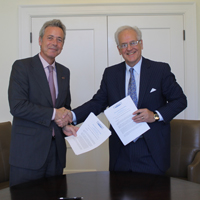 Later that morning, Business Dean Larry Pulley signed a memorandum of understanding between W&M and the Fulbright Commission in Spain to provide the opportunity for one eligible Spanish Fulbright candidate each year to pursue the two-year MBA program in the Raymond A. Mason School of Business.

During a luncheon held at the Muscarelle Museum of Art, Karin Wulf, director of the university’s Omohundro Institute of Early American History and Culture, discussed the work of the institute. Paul Mapp, associate professor of history, and Molly Warsh, an assistant professor of history at the University of Pittsburgh — both of whom held National Endowment of the Humanities postdoctoral fellowships at the institute — shared insights from their research in Spanish archives.

“Early America was vast — chronologically and geographically,” Wulf later said. “Here in Virginia we sit at the very center of that vast early America, at the eastern edge of North America, and the western edge of an expansive Atlantic world, for example, in which Spain played a critical role.

“Because the Omohundro Institute is the leading research and publication organization for the study of this expansive early America, the U.S.-Spain Council meeting was a wonderful opportunity to share award-winning research by two of our scholars.”

“Spain is among the three most popular study abroad venues for our students, and we have ties to many Spanish universities,” said Reveley. “Here on campus Spanish is the foreign language with the highest enrollments among our students. Many William & Mary professors have deep research commitments and interests in Spain. Today an agreement was signed between William & Mary’s business school and Fulbright Spain, making it possible for a highly talented graduate student from Spain to study in our MBA program, starting next academic year.

“In short, William & Mary has significant ties to Spain, which we value enormously,” he said.

The forum takes place annually, alternating its location between the U.S. and Spain. In addition to William & Mary, this year’s sessions took place at venues in Kingsmill and Colonial Williamsburg. Friday morning, Virginia Gov. Tim Kaine joined other dignitaries including Brad Smith, president and chief legal officer of Microsoft, and Erin Egan, vice president and chief privacy officer for Facebook to announce the completion of the Marea transatlantic cable, which stretches from Virginia Beach to Bilbao, Spain, and can transmit 160 terabits of data per second.