The following story originally appeared in the fall 2017 issue of the W&M Alumni Magazine. Wilford Kale '66 will hold a book talk and signing at 5:30 p.m. Nov. 13 in Swem Library's Ford Classroom. - Ed.

Wilford Kale ’66 likes to say that he came to William & Mary at age 18 and never left. This spring, he published his fifth book on the university, “From Student to Warrior: A Military History of the College of William and Mary.”

The book chronicles the history of the military at the university.

Born and raised in Charlotte, North Carolina, Kale first came to William & Mary in 1962. He spent five years working toward a diploma before serving two years in the Army, including one in Vietnam. Kale finished his undergraduate degree at Missouri’s Park College in 1971.

He spent 25 years in the newspaper business, writing for the Richmond Times-Dispatch. In 1994, he switched careers, moving to the Virginia Marine Resources Commission (VMRC). There, he developed the agency’s public affairs office, ultimately becoming a senior policy advisor for the organization. 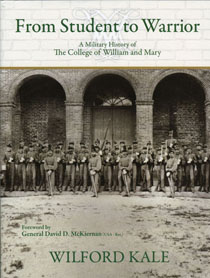 When Kale retired from VMRC in 2007, he was already immersed in his next career — historical writing. Kale, a life-long history buff, had already published his first book, “Hark Upon the Gale,” while still working for the Times-Dispatch. Wanting to pursue a master’s degree in history, he sought out the University of Leicester in the United Kingdom.

“I saw they were recruiting students from continental Europe,” he says. “I immediately emailed the department and asked, since they were taking continentals, would they mind accepting a student from the colonies?”

In short order, he became an extended learning student at the university, completing his degree in 2012. His master’s thesis was the basis of his new book. Kale scoured the archives at Swem Library, in addition to repositories nationwide, to create a comprehensive book detailing William & Mary’s connection to the military going back to the university’s earliest days.

Kale says his interest spurred from the fact that battles of two major wars, the American Revolution and the Civil War, were fought in the immediate vicinity of campus.

Kale found that while Virginia’s legislative bodies worked to shelter William & Mary students from military service, faculty and students frequently joined the fight anyway. They did not always fight on the same side.

“During the Revolution, the professors and the school president were Tories, but the Board of Visitors was full of rebels,” says Kale. “During the Civil War, of the 60 students who joined the military in the spring of 1861, two joined the Union Army, while the other 58 fought for the Confederacy.”

According to Kale, William & Mary’s history remained closely connected to the military well into the 20th century. During World War I, the College admitted women for the first time while many men were fighting in Europe. During World War II, both the Navy Chaplain’s School and the Army Special Training Program moved to the university’s campus.

Today, William & Mary maintains a strong connection to the military, generating a significant number of military leaders, soldiers and veterans’ advocates. Kale points out that in this century alone, the university has produced 32 generals and admirals.

Just months after publishing “From Student to Warrior,” Kale is already working on his next project, a book about Yorktown. When asked about the motivation driving his prolific writing on William & Mary, he didn’t hesitate.

“We in Williamsburg live right in the middle of American history,” he says. “I don’t want people to forget that.”