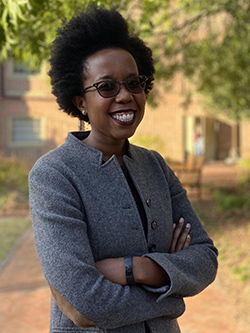 Dr. Kelebogile Zvobgo is the founder and director of the International Justice Lab (IJL) at William & Mary's Global Research Institute, which brings together faculty and students to conduct research on human rights, transitional justice, and international law and courts. Recently, IJL research has been published in academic journals like the International Studies Quarterly and Journal of Human Rights, as well as in popular press outlets like The Washington Post and Foreign Policy.

Zvobgo is a trusted and authoritative voice on issues involving transitional justice and her recent work considers the role that truth commissions can play in addressing historical injustices in racially divided societies like the United States.

Can you explain for us what a truth commission is and the role it plays in society?

Truth commissions are inquiries into human rights violations and other abuses. For the most part, historically, they have been established in countries coming out of armed conflicts or after the fall of autocratic regimes. But, we have also seen them in standing democracies like Canada and South Korea. Commissions are temporary bodies established by governments to investigate historical (and sometimes also contemporary) violence.

They establish a pattern of abuse over time and make recommendations to redress past harms and prevent future harms. Importantly, commissions engage affected communities in their work, providing them a venue to share their narratives and have them reflected in the national narrative. Commissions, in some instances, can also facilitate interpersonal and societal reconciliation — but that last part is not a given.

What would a truth commission look like here in the U.S.?

We've actually had national truth commissions here in the U.S. One was the Commission on Wartime Relocation and Internment of Civilians that was designed to investigate Japanese relocation and internment during the Second World War. That was implemented in the early 1980s and it made several recommendations, among them reparations to Japanese Americans, as well as education. The Commission called for public education across the country and an apology — and all of those were delivered. That was really quite a win…

Now, there have also been initiatives at the state level, some of them completed, some of them ongoing… In 2019, the Maryland state legislature created the Maryland Lynching Truth and Reconciliation Commission, which is going to investigate lynchings in the state during the period of Jim Crow.

Currently, there are about 40 people who are documented as having been lynched, so they want to investigate the circumstances of these lynchings and add to the knowledge base of lynchings in this state — and the racial terror that permeated communities as a result — and address how descendants are faring and to implement such things as memorials, historical markers, etc. and anti-violence legislation.

Since the police killing of George Floyd in May of 2020, a lot of cities are engaging seriously with the idea of having a truth commission to address different types of abuses. Some of them are limited to what's happening … for example, inside a district attorney's office to investigate unfair prosecutions or police brutality.

In Congress, there is currently a proposal to create a United States Commission on Truth, Racial Healing, and Transformation. So, there is an ongoing effort to have a truth commission to address issues of racism, systemic injustice and inequality — and bring us to a place where there is an authoritative account of the past.

To have a body like this one, to investigate abuses against Black Americans and people of color over the centuries, would be to say, “this is our history” and develop a set of recommendations to address historical and contemporary issues. That would be very, very powerful, especially if it's coming from a unit within the federal government.

Do you think that reparations will become a more serious part of the national discussion regarding a remedy, if you even want to use the term remedy?

A lot of that would depend on what the truth commission suggests. Truth commissions actually issue policy proposals based on their findings. So, if they identified a particular set of abuses against a specific population, they might recommend specific reparations to direct victims or to indirect victims.

It's a range of remedies that truth commissions recommend, and then it's on policymakers to implement them. The main thing is to start with the script that's set by the truth commission.

Communication is a key part of this work — and a key part of the democratic process —  so how, in this politically polarized time, do we get policymakers to respectfully communicate with each other?

That's gonna take a lot of hard work. It's my belief, and many others are welcome to disagree, that many Americans don’t see democracy as a process, but as a way to get what they want done. So, there is not a fundamental commitment to representation, and to the ideas that have the most support winning over, but rather there's a greater commitment to … winning one's preferred agenda.

I think that's where the real problem is — and I think it's going to require a lot of education and re-education to make clear why democracy matters, and how quickly it can be lost.