by Staff |  October 11, 2013
The performance of three William & Mary summer interns, that concluded with their participation in the Unified Quest: Deep Futures war game at the Army War College in Carlisle, Pa., has resulted in a mutually beneficial partnership between the university and Army’s Training and Doctrine Command (TRADOC). 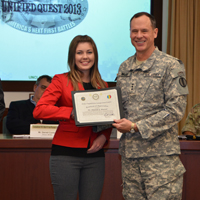 Col. Kevin Felix, chief of the Future Warfare Division, said the program served as “a foundation for a broader partnership in learning between the Army’s Training and Doctrine Command and the College of William & Mary.”

Based on the success of this summer internship, TRADOC is now participating in the PIPS E-internship program where students at the College telecommute to internships with international security-related organizations during the regular academic year.

“We are delighted with the success of the TRADOC internship and look forward to further cooperation with the Command,” said Dennis Smith, director of Project on International Peace and Security (PIPS). PIPS is part of W&M’s Institute for the Theory and Practice of International Relations.

Felix noted the students’ performance during this summer’s program was a determining factor in the Army’s decision to move forward with the E-Internship partnership.

“The students that participated in the inaugural program performed magnificently,” Felix said.

The students — Amanda Brazzel ’13, Christopher Coelho ‘15 and Eric Sawchak ‘14 — were recognized during the war game event by Lt. Gen. Keith Walker for their outstanding work over the summer preparing for the simulation. The students conducted research and wrote papers for the Human Dimension, Future Warfare, and Science and Technology Divisions of TRADOC’s ARCIC.

“Bridging the academic and policy communities in the area of undergraduate education in international security is one of the reasons we founded PIPS six years ago,” added Amy Oakes, PIPS co-director.

For the students, the experience gained during the PIPS-TRADOC internship was invaluable.

“My internship at the Future Warfare Division provided me with unparalleled exposure to the full range of national security issues,” said Coelho. “The work I was given contributed directly to briefings given to senior Army leaders, including the Army chief of staff. It was an amazing experience that taught me how to think critically about real world issues, and helped me develop both academically and professionally."

Felix added, “Incorporating as many insights as possible, including young thinkers, is an important aspect of what we do in the Future Warfare Division and we intend to offer opportunities to strengthen our partnership in learning."