B.J. Minor ‘13 has the lead role in the upcoming W&M production of August Wilson’s award-winning play “Joe Turner’s Come and Gone,” which opens Oct. 4. Minor, a government major, will play Herald Loomis, a man who is struggling to put his life back together after spending seven years illegally enslaved by plantation owner Joe Turner in the early 20th century. In the following Q&A, Minor discusses how he developed his portrayal of Loomis and the connections that Minor found with him and with the play overall. -Ed. 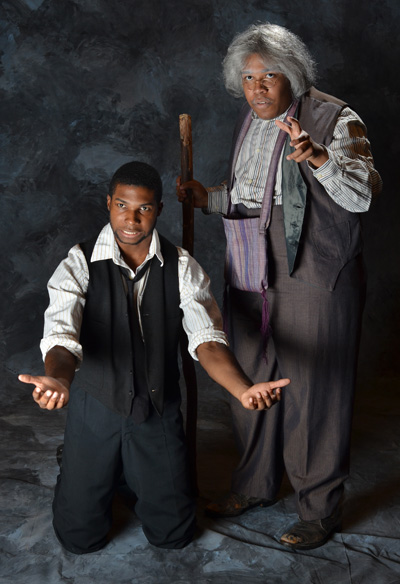 Q. Tell me a little about the character of Herald Loomis.
A. “Herald Loomis is a man who is disconnected from himself, his song, and his family after being captured by Joe Turner, brother of the governor of Tennessee. When he is released by Joe Turner seven years later, he is reconnected with his young daughter, Zonia, and begins a journey with her to find her mother/his wife, Martha. However, his search for his wife is not the point of the play. He is a man looking to be self-autonomous and have a song he can sing; he is a man looking for his place in the world.”

Q. How did you go about developing the character?
A. “To bring Herald Loomis to life I really had to think about how a man who has been through the hardships he has would walk and talk. I played with rougher deeper tones for my voice. I also played with posture, walking pace and crooked mannerisms. Our director, Artisia Green, really put into perspective traveling in the early 1900s. In a rehearsal, she had us walk from PBK to Jamestown in the night. I realize that it's a short walk, but as Herald Loomis with a young daughter traveling in the cold of the night, that short walk was a little scary.”

Q. What, if any connections, did you find with Herald?
A. “Herald Loomis is a person, just like you and me; he has feelings yet his social interactions are off as a result of being captured by Joe Turner. He was property. After being released he had to re-find himself and his song, but because of his life experience when he finds it he will sing it differently. My job as the actor is to make the audience sympathize and hopefully empathize for this broken man even though he has quirky, off-putting social interactions.”

Q. Did you find any connections to the play as a whole? If so, what were they?
A. “This play applies to our everyday lives, especially as college students. The people in the play are looking for their places, their worth in the world; we do the same now. We try to fit in this world, and find our place and worth.”

Q. What do you hope that your portrayal of Herald Loomis brings across to the audience?
A. “I really hope that people don't hate Herald Loomis when the show ends. I hope they can understand that his quirks are a result of a bad life experience and he is trying his best to make his world right.”

Q. It has been reported that this was August Wilson’s favorite play. What insights about Wilson and his importance as a playwright did you garner from this experience, if any?
A. “Wilson creatively discusses history. He retells harsh and tragic times of our past so we don't forget and make the same mistakes. ‘Joe Turner's Come and Gone’ is a ghost story. These spirits from our dark past come back every time we perform, but these spirits don't want to scare us; they want to protect us from doing these evil things again.”

Q. What will you take away from this experience?
A. “I'm taking away more knowledge of the lives of my ancestors and their hardships, as well as an appreciation for the great fight they fought in order for people that look like me to have the opportunities I have like going to the College of William & Mary.”

Q. Anything else you’d like to add?
A. “I really hope people enjoy the show. I am super nervous, but I think it will turn out great.”