Research by Assistant Professor of Government Jaime Settle is featured this month in the cover story for the journal Nature. The article was published Sept. 13.

The research focuses on the influence of online social networks on behavior. Specifically, Settle and her colleagues conducted an experiment with 61 million Facebook users, 18 or older, looking at the impact messages sent via the site had on voting behavior during the 2010 Congressional election. The results were clear. 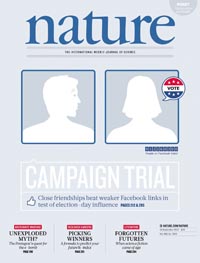 “The results show that the messages directly influenced political self-expression, information seeking and real-world voting behavior of millions of people. Furthermore, the messages not only influenced the users who received them but also the users’ friends, and friends of friends,” Settle and her colleagues wrote.

In a democratic system where one vote can change the outcome of an election, any degree of influence on that vote is significant, the team noted.

“While the effects of the mobilization message on any one individual were small, the magnitude of the effect given its spread through the social network is powerful. Close friends are especially influential, and political mobilization harnessing the power of social influence has great potential.”

The study’s findings were also featured in the New York Times, the Washington Post and CNN.

Settle says she will continue the research at William & Mary.

“I’m looking forward to continuing my work with my colleagues at UC San Diego and at Facebook, and working with students at William & Mary to further develop our knowledge of the connections between the online and offline worlds. Students of this generation – for good reason – are profoundly interested in studying the effects of social media and social networks on real world behavior.”