William & Mary students Cody Armstrong ’22 and Max Berckmueller ’23 took on-the-job training to a whole new level while interning with the City of Williamsburg over the summer.

They took part in the City of Williamsburg Management Rotation & Special Project internship where they immersed themselves in every department, from fire and police to public works and parks and recreation. In addition to that experiential training, the interns worked on a management-level task that required a detailed report to either Williamsburg City Manager Andrew Trivette or to City Council.

Applications for these particular summer internships, which have been offered the last three years, typically go out sometime in the spring.

“I don’t think I could ever stress this enough just how life-changing this internship was and how amazing every person I met in the internship was,” said Armstrong, a public policy major. 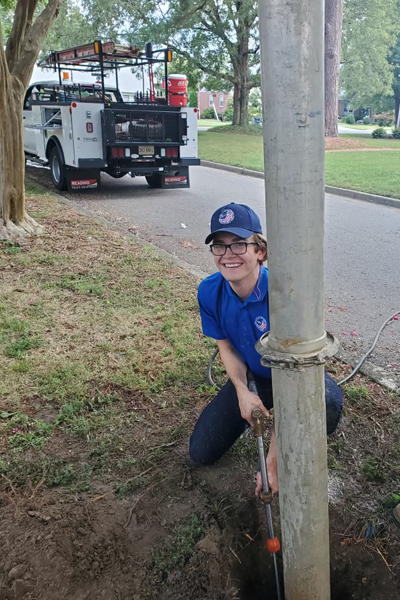 Berckmueller was amazed by all that was covered during the nine-week internship.

“I did everything from IT to finance to fire,” said Berckmueller, a government major. “There’s 10 different careers I want to explore now in local government.”

The paid internships included a managerial rotation through seven of the city’s departments. Armstrong and Berckmueller spent one week with each department, learning the jobs and functions of each and performing tasks.

“That's why I designed the internship with this rotation of going from department to department, not just sitting in a chair and hearing a lecture from the department head about how the department works, but actually getting in the sewer ditch with the water and sewer crew and fixing the pipe and working on the budget with the budget staff,” Trivette said.

“Everything that you can think of, I wanted it to be covered, and at the same time I wanted you to get the experience of what it's like to manage all of that and think about larger questions of policy.”

Both Armstrong and Berckmueller learned of the internship through W&M Government and Public Policy Professor John McGlennon.

“The City of Williamsburg and especially City Manager Andrew Trivette went above and beyond in the generosity provided to our student interns,” McGlennon said. “In what was an extended nine-week program, the students were able to experience all the city departments and get a rare inside look at the complexity of local government.

“These internships have been invaluable, whether a student ultimately winds up in local government or becomes familiar with how their community depends on the direct services provided by cities, counties and towns.”

At the start of the internship, Armstrong and Berckmueller were asked to select a special project from a list of topics. Armstrong chose the shared mission-funding plan, which explored a new budget for shared mission funding between the fire department, police department and human services.

Berckmueller selected employee benefits review, which required research on benefits offered by local governments in Virginia and across the country to identify innovative ideas that the city should consider implementing.

“It forced me to think outside the box, think critically and work very strongly with all three departments, as well as finance, to come up with a solution,” Armstrong said. “It really broadened my horizons past just social policy, but also made me look at financial policy and understand budgets in a way that I probably would not have before this.”

Armstrong, a native of Carrolton, Virginia, is a Student Assembly senator for the class of 2022. He wants to advocate for students on and off campus and has recently become a leading voice for William & Mary students with City Council.

“I'm really trying to build a relationship between the city and the school, and I’m also working with disadvantaged students and minorities to help uplift their voices on campus,” Armstrong said.

“I just really want to leave William & Mary a better place than it was when I got here, and I feel like I finally have the confidence and the platform this year to do it, especially with working on relations between the city and the college.”

The internship “really opened my eyes to my love of local government, and hopefully one day in the future either I'll come back to Williamsburg or another city and help its local government the best I can,” Armstrong added.

Berckmueller grew up in Williamsburg, and the city’s municipal building is a 10-minute drive from his home. When he saw friends landing summer internships, Berckmueller decided to seek out one of his own.

“I think I’m just incredibly lucky with how well this internship worked,” Berckmueller said. “Prior to this, I only ever really considered going into state or federal government. But having actually experienced it, having the opportunity to do this internship, I definitely think that it's opened up my eyes and I'm a great deal more interested in working in local government I think even more than working at those higher levels of government now.”

Having William & Mary students as interns is a mutually beneficial arrangement, Trivette said. During their time as interns, Armstrong and Berckmueller brought value to the city through their personalities and viewpoints, as well as their work.

“I can safely say all of the interns that we had have produced a product that we turned into action, and we will do that with the reports that were done by both Cody and Max,” Trivette said.

The internships are beneficial to the students, the city and William & Mary.

“I think the students go back to William & Mary with a much greater appreciation for a pretty large breadth of available opportunities to them, whether it's in the public sector or the private sector, because all of our jobs translate to something in the private sector. And I think the interns come away with a much deeper sense of who they might want to be post-college,” Trivette said.

“When they go back to William & Mary, I hope that their experience is so positive and they have such an appreciation for the people that do the jobs here in the city that they are our advocates, they're ambassadors for the city, and that's something that we desperately need.”