Combing through volume after volume of archival records, the lives of artists in colonial Quito, Ecuador, started to take shape.

That’s how Susan Verdi Webster, Jane W. Mahoney Professor of Art and Art History and American Studies at William & Mary, did the groundbreaking research for her new book. Her painstaking inventory of archival documents in the city resulted in Lettered Artists and the Languages of Empire: Painters and the Profession in Early Colonial Quito, which was published in September by the University of Texas Press.

“It’s a book about painters and the profession — who they were and how they practiced the profession,” she said. “Moreover, the documents tell us that, counter to previous assumptions, the vast majority of these painters were native Andeans.”

Webster has been conducting research in Ecuador for the past 20 years and has used information she gathered for previous books on architects and builders. Her next project will be on sculpture.

Using mostly notarial archives, she was able to trace the activities of numerous previously undocumented artists by name as they built their livelihoods making religious-themed paintings. She was fascinated that the indigenous painters were able to master not only the language, but the art of painting, and to thrive in colonial-era Quito.

Webster used public, religious, private and other documents to amass a database of thousands of pages of records captured in digital photographs. Culling through the vast quantities of data written in 16th-century Spanish script took quite some time, but she described archival research as “every day is like Christmas” in that she never knew what surprises awaited her. From the national archives, she obtained notarial records and systematically combed through every volume from 1550 to 1800.

“So what I did was not just collect material on architects and builders and buildings and materials and things like that, but I kept coming across all of these painters, sculptors, gold- and silversmiths — a whole range of artisans,” Webster said. “And so I just collected all of that material along the way, too.”

Up to that point, only a handful of artists in colonial Quito had been identified and credited with most of the paintings done there between 1550 and 1650. Webster documented approximately 50 painters through specific information on their purchase of land, homes, commodities and the commissions and sales of their work.

Their recorded transactions gave her a window into their level of literacy and skill, which is why she included the words “lettered” and “languages” in her book title. At the time when the Spanish ruled what 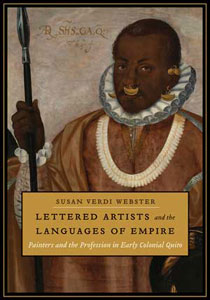 is today Ecuador, the 95 percent of those artists who were indigenous were learned and flourishing in the artistic landscape centered in Quito.

These local artists did not work the way Europeans did at the time with step-by-step educations, workshops, assistants and guild structures.

“So they’re native artists who learned the European language of painting,” Webster said. “And they almost never signed their work.”

They did, however, inscribe their names on scores of notarial documents with calligraphic signatures “that demonstrate a deep knowledge of European scribal conventions,” she said.

“And this is early,” Webster said. “In 1534, Quito was established as a Spanish colonial city and already by the 1550s and ‘60s you’ve got indigenous artists — painters — who are successfully negotiating the Spanish bureaucratic system. They’re going before notaries, and they’re creating documents that protect and promote their own interests.”

She points out that in the Andean region prior to the Spanish invasion, none of the cultures developed any form of alphabetic or pictographic writing. Their communicative forms employed other types of graphic expression, which they continued to use after the Spanish arrived.

“The alphabetic script that indigenous painters obviously mastered was just one more form of graphism, one more form of graphic communication similar to European painting, where you’re manipulating colors and forms and iconographies,” Webster said. “So one of my main points in this book is that these early painters in Quito were masters of both the pen and the brush. And it was primarily indigenous painters who were creating these pictorial graphic worlds for a diverse colonial audience.”

The paintings were almost exclusively religious because most people in both South America (and Europe) at the time were illiterate, and images were thus a primary form of communication and religious indoctrination.

“So it’s in that context that we have this group of indigenous painters who are consummately literate, they are lettered, and hence the title ‘lettered artists,’” Webster said. “And I take that lettered status to go farther than simply the ability to manipulate alphabetic script, but a mastery of all of this range of languages, graphic, iconographic, pictorial — languages of empire. And I mean not just the Spanish empire, but the Inca empire because Quito was built on the site of an Inca settlement and the son of the last independent ruler of the Inca empire, Francisco Atahualpa, lived in Quito during the colonial period.”

Atahualpa’s extensive residence and lands in the southern part of the city attracted all manner of artisans, and was surrounded by the houses of indigenous painters, stone masons and gold- and silversmiths. Webster also discovered that their surnames indicated that the Inca-descended painters lived in this part of the city and the non-Inca, autochthonous painters in another.

She traced the upward trajectories of many of the painters by seeing what they were able to purchase over time — houses, land, commodities — but also their rise in social status was indicated by their titles changing as time went by, as many came to bear the honorific title “Don” (roughly, “Lord”). Though there was no formal guild structure, some artists might go from painter to journeyman painter to master painter over the course of their lives.

Painters signed contracts for their works, acquiring ever-greater commissions for massive multimedia altarpieces or multiple copies of the same painting, and they also sold paintings locally and regionally, some of which were exported to Europe.

“This is a whole language of iconography that was initially completely new to indigenous painters, yet they came to be the principal creators of religious images,” Webster said. “They were the majority that were creating Christian religious images for a colonial public of Spaniards, Creoles, Africans and indigenous people as well. They dominated this visual field. That seems pretty remarkable to me, too.”