For one night only, Tom Jones is coming to William & Mary on March 1 – at least in spirit.

As part of the university’s 60-plus year commemoration of St. David’s Day – where all things Wales and Welsh culture are celebrated – English professor, poet and biographer Nancy Schoenberger will present a retrospective of Jones’ more than half-century in show business. Now Sir Tom Jones, the 75-year-old balladeer and Welshman has experienced a remarkable career renaissance in recent years.

The event, which begins at 6 p.m. and is free and open to the public,  will be held on campus in room 201 of Blow Hall. A reception will follow.

Joining Schoenberger will be Robert Jeffrey, president of the Friends of Wales-Williamsburg chapter, who has been directly involved in keeping the celebration alive since the mid-1960s.

Schoenberger’s presentation will be a video tour of the career of the legendary Jones, including the singer's impact on popular culture.

“This is someone who was written off as a kitsch figure, who wasn’t taken seriously as an artist in the 1970’s and 1980’s until his son, Mark Woodward, took over his career and changed its direction. That brought about a resurgence in the 90’s,” Schoenberger said.

His 2015 release, Long Lost Suitcase, is the third in a trilogy of popular autobiographical albums featuring songs that impacted on his serpentine show-business career.

Part of the reason that Jones appealed to Schoenberger is what she called “The Redemption.” When his popularity began to wane in the mid-1960s, Jones took to Las Vegas, where he became close friends with Elvis Presley. Eschewing recording, Jones performed regularly in Vegas for years and, as late as 2011, made annual appearances.

“He became kind of a lounge lizard-character,” Schoenberger said. “Since his autobiography came out (November 2015), and over the course of two or three years, he has put out CDs of gospel, American roots, Blues, and covers of songs by Leonard Cohen, Bob Dylan, John Lee Hooker and Paul Simon, among others," she continued. "It’s a whole new reincarnation of his career. Now, with his silver hair and new, pared-down style, he’s gone from entertainer to artist – a true legend.”

For the many who don't know, St. David is the patron saint of Wales. He was a sixth-century Welsh monk who gained a tremendous following as a preacher and teacher. He is said to have founded more than 50 monastic communities that served as refuge for the homeless and victims of invasions.

William & Mary’s celebration of St. David’s Day can be traced to 1758, when Goronwy Owen – rescuer of the Welsh bardic tradition and considered to be a poet on par with John Milton – came to the university following a rollicking, tawdry life in Wales and England. A former parish priest, for two years he was the master of the Grammar School and taught Latin and Greek in the Wren Building.

Owen’s tenure at the university ended in 1760 after he led a drunken brawl between the young men of the College and the young men of the town. He wound up at a church in Brunswick County, Virginia, where he died and was buried in a hard-to-find field that might be unrecognizable today were it not for the fact that a stone was placed at his grave by Melville Jones, then W&M Provost, in 1957.

The next year, a plaque in Owen’s honor was presented to English Professor David Jenkins and the university by Sir John Cecil Williams of the Cymmrodorion Society, a London-based Welsh learned society. It hangs today in the university’s Swem Library, the centerpiece of a display of Welsh poetry books and others on the country that was established in 1969. 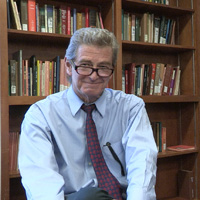 Prodded by Americans of Welsh descent, in 1892, an excerpt from the minutes of a meeting of W&M’s Board of Visitors reads, “The Board has heard with pleasure the purpose for the Welsh citizens to honor the memory of their great poet, Goronwy Owen, master of the Grammar School at this College, by some suitable memorial. The College is authorized to communicate to the proper authorities the wishes of the board to cooperate with them in their laudable designs.”

That’s just one example of the connection between William & Mary and Owen and St. David’s Day through the years. In 1989, state legislator and former government professor George Grayson went before the General Assembly of Virginia and read a resolution that honored St. David and proclaimed March 1 as St. David’s Day in Virginia. Recent celebrations have focused on the life and career of actor Richard Burton and an interdisciplinary performance of Dylan Thomas' play, Under Milkwood, by Schoenberger's students and those in Associate Professor Elizabeth Wiley's theater class.

This year, images and recordings of Sir Tom Jones and his timeless voice will be the centerpiece of the university’s commemoration.