R. Benedito Ferrão recently arrived in Goa, India, to embark on a new stage in his career as a writer and scholar.

Ferrão, an assistant professor of English and Asian & Pacific Islander American studies (APIA) at William & Mary, is in Goa conducting research as part of a prestigious Fulbright-Nehru Academic and Professional Excellence Research Award he recently received in the field of literature. Ferrão is exploring the representation of Goan diasporic figures in contemporary fiction while at the Xavier Center of Historical Research in Goa as part of a book project on the subject. 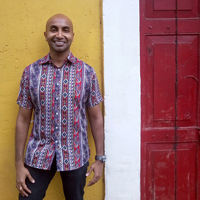 Ferrão was notified of his award in January. The federal government was in a shutdown at the time, casting some uncertainty on when he would actually receive the funding.

“When the dust settled on that matter and I was told the Fulbright-Nehru Academic and Professional Excellence Research Award was a go, it almost felt like winning it a second time,” Ferrão said.

The U.S. Department of State and the J. William Fulbright Foreign Scholarship Board announced Ferrão’s award via press release in September.

“Fulbright announced a press release just for him,” said Francis Tanglao-Aguas, a founding director and professor of APIA studies at W&M. “Professor Ferrão receiving a Fulbright — it’s not a Fulbright Fellowship; it’s a Fulbright Award — confirms the excellence and promise that we all know lives in him. As his work is recognized, so too is William & Mary’s APIA studies. It puts us on the map.”

Before coming to William & Mary as a Mellon Faculty Fellow in 2014, Ferrão taught at UCLA and Birla Institute of Technology and Science (Pilani) Goa. This past summer, he served as a visiting assistant professor at Hankuk University of Foreign Studies, Seoul.

He is still in the early stages of his teaching career, making this Fulbright Award even more remarkable.

“Bene is in his third year as an assistant professor, so he’s not tenured yet,” said Suzanne Raitt, English department chair and chancellor professor of English at W&M. “To get an award like this at this stage of your career is pretty unusual. It’s great for Bene, and it’s great for us because we get more visibility internationally. And Bene gets some research time to prepare for tenure and to get ready to publish, even more than he would have done otherwise. So even though we miss him, it’s a win-win situation.”

Ferrão has been in Goa for just over a month, and the duration of his fellowship coincides with the academic calendar at William & Mary.

His time in Goa allows him to revisit the Xavier Center of Historical Research where he began doing his research.

“My book project looks at several works of fiction that connect South Asia, Africa and the West through the displacement of Goan characters,” Ferrão said. “Goa was once the capital of the Portuguese empire in the East, making it one of the longest held European colonies in history (1510-1961).

“For this reason and despite being a small territory, Goa was, and is, connected with many parts of the world, including British and Portuguese Africa and European metropoles. Using the novels I research, I thus argue that Goan movement across history and various continents occurs in relation and opposition to the idea of nation in multiple times and places.”

Ferrão’s education and career have taken him all over the world. He completed his Ph.D. at Birkbeck College, University of London, where he was a Rotary Ambassadorial Scholar.

As an Endeavour Postdoctoral Fellow at La Trobe University in Melbourne, Australia, he researched literary representations of African slavery in the Indian Ocean world.

An internationally published writer, Ferrão’s work appears in Outlook India, Media Diversified, The Good Men Project and Mizna, among other publications and websites.

“He’s just an amazing guy. I always like to say that no student should graduate without taking a Professor Ferrão course, especially those students who are interested in going to graduate school,” Tanglao-Aguas said. “He’s just the best there is.”