But doing what one needs to do to get through it is essential, as illustrated in a new work by Omiyẹmi Artisia Green, William & Mary associate professor of theatre and Africana studies and Sharpe Associate Professor of Civil Renewal and Entrepreneurship.

She has written “Dance of the Orcas,” which she has termed a choreo-ritual that incorporates dance, music and prose. It will be performed Nov. 7 at 8 p.m. at the Sadler Center Commonwealth Auditorium as part of the Nov. 5-9 Association for the Study of the Worldwide African Diaspora conference. The performance is free and open to conference attendees and the W&M community.

The piece features student actors and dancers from W&M and Christopher Newport University, choreography by CNU Associate Professor of Dance Ann Mazzocca Bellecci and the live band Alagbara from Hampton.

{{youtube:medium:right|YM6ZaIjx95Y, In rehearsal: Dance of the Orcas}}

Inspired by her own journey of loss, discovery and the well-documented grief ritual last year of an orca whale named Tahlequah, Green tries to capture how women work through feelings that can’t necessarily be described in words. Though based on very personal experiences, Green said she tried to make the work universal.

“I approach this work from a place of specificity,” Green said. “The aesthetics which inform the choreo-ritual have African roots, but everyone can see their humanity in this work. The themes of loss, fear, recovery, ancestry and healing are universal.”

This idea took shape over the past couple of years as Green traveled to research Yoruba cultural and philosophical aesthetics in Brazil, Nigeria, Trinidad and Tobago, and Mexico and while being initiated to become a Yoruba priestess of Yemoja, which added Omiyẹmi to her name to signify “water is good for me.” 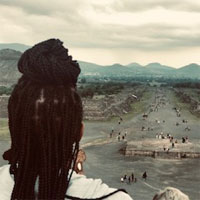 During this time, Green was facing her fears of flying long distances, vast bodies of water and the unknown. She was coping with ongoing medical problems, yet she was determined to seek a larger set of experiences throughout the African diaspora, even though admittedly nervous about all the newness and uncertainty.

“My experiences in each country were transformative,” Green said. “I recovered pieces of a long forgotten personal and collective history that not only shaped my teaching, pedagogy and scholarship, but were instrumental in my journey of healing.”

Through all of the conference presentations, performances, religious ceremonies and cultural sites, rituals and encounters, Green was reminded that one of the ways people seek solace and liberation is by returning to their roots and through the performance of culture. After returning home, she wanted to record of some of what she had experienced through performance ethnography, saying she “needed to creatively archive her discoveries.”

Meanwhile, issues with Green’s own physical body were getting worse. At the same time, the story of Tahlequah’s 17-day journey of carrying her dead baby calf on her head in the ocean while grieving was playing out in the international media.

Green was transfixed by the story, noting how the other whales supported the process.

“Not only was I moved by Tahlequah’s emotional depth, I was also gripped by how the pod shared the weight of her pain,” Green said. “Grief, remembrance and healing were collective performances. I said look at what we’re learning from these orcas on how to gift ourselves with time to process the things that happen to us, to really swim in the ocean of our feelings, to own how we feel, to actively remember our losses and pain and then release the trauma. Not store it in our body, but release it.” 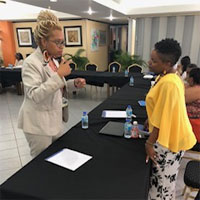 She had pressed down trauma throughout her life, Green said, always saying she didn’t have time to deal with it, crying wasn’t going to help, talking wasn’t going to help. From a long line of women whose strength meant the survival of their family units, she was used to carrying on with what had to be done each day.

But her recent experiences had also brought to the surface the idea that if feelings aren’t dealt with, they will manifest eventually in one’s physical health, Green said. That was happening to her, and she had to face it.

“As I began to investigate all of what was going on with my physical health, I was reminded how the spiritual and the material work hand in hand,” Green said. “From an Africanist perspective, I knew this intellectually. But theory was a reality. My body was telling the story.”

Taking time away from the university to have a partial hysterectomy forced several things, Green said. She had to take the time to heal from the procedure, but also to grieve the loss of a twin she had carried early in pregnancy with one of her two sons.

That became the context for “Dance of the Orcas.” The choreo-ritual features a re-enactment of Tahlequah’s journey of grief deep into the ocean and the depths of her emotions with her community of whales, Afro-Cuban folkloric music that includes drumming and other instrumentation and folkloric orisha dances for some of the main forces of nature.

Those forces include Oya, which is the energy of change and transformation that shows up in the wind and in our breath; Eshu, who sits at the crossroads representing energy around decisions, choices, openings and closures; and Yemoja and Olokun, which are representations of the water, top layer and deepest aspects of the ocean. 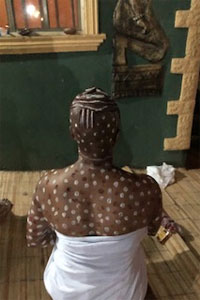 Green is using her new name Omiyẹmi to remind herself to constantly replenish herself with water, but more importantly as a reminder to be constantly aware of her emotional health, she said.

“At the core of loving oneself and being healthy and whole is to honor your feelings,” Green said. “Each time we suppress our emotions, we lose a little of our humanity, becoming shells. I play with this idea in the play through the main character who likes to collect seashells — a symbol of how hollow she becomes as a result of denying herself a complete emotional life.

“I have often heard that women are too emotional. But I think that’s part of our power — that we’re able to swim in the full range of our emotions. We need everything — that’s one of my favorite lines in the play. Tahlequah has to confront and give voice to everything she has repressed, in some cases forgotten, in order to truly begin her journey of healing.”