Professor Deborah Steinberg of William & Mary’s Virginia Institute of Marine Science has been selected as one of the Commonwealth’s outstanding faculty members by the State Council of Higher Education for Virginia (SCHEV).

Steinberg, the CSX Professor of Marine Science in W&M’s School of Marine Science at VIMS, was one of 13 faculty members from Virginia’s public and private colleges and universities honored with a 2015 SCHEV Outstanding Faculty Award. The awards program has been sponsored by Dominion Resources since 2005.

W&M President Taylor Reveley says, “These awards signal extraordinary prowess on the part of those who receive them, and Debbie’s accomplishments in teaching, research, and service are truly exceptional.”

VIMS Dean and Director John Wells adds, “Debbie is a gifted and remarkably dedicated teacher and mentor who is highly deserving of this award.”

Steinberg consistently receives outstanding evaluations in her graduate and undergraduate courses, and since arriving at VIMS in 2001 has served as major advisor to six master’s students, seven Ph.D. students, and two postdoctoral fellows. She has also served on the thesis committees of 28 additional graduate students, 24 at VIMS and four at other institutions, and has mentored 14 undergraduate and high-school students.

Steinberg’s students have in turn gone on to successful careers in education, government, and the private sector. Former student Rob Condon, now an assistant professor at North Carolina State University Wilmington, says, “Debbie  has equipped a new generation of marine scientists to succeed and inspired them to be innovative and leaders in the international community.”

Linda Schaffner, associate dean of academic studies at VIMS, says “Everything Debbie does is infused with an infectious enthusiasm for scientific curiosity and a love of the natural world. Our students have benefited from her dedication to excellent teaching, both in and out of the ‘traditional’ classroom, and her genuine concern for student success.”

Outside the classroom, Steinberg has established an international reputation in biological oceanography. Her research focuses on the role that zooplankton play in marine food webs and the global carbon cycle, and how populations of these small drifting animals are affected by changes in climate.

Steinberg’s research programs have operated in marine ecosystems from Chesapeake Bay to Antarctica, the Sargasso Sea, the Amazon Plume, the California Current, and the North Pacific. She and a team of students and staff will return to Antarctica in late December for another six-week field season, marking seven years of involvement in the National Science Foundation’s Long-Term Ecological Research program at Palmer Station on the West Antarctic Peninsula. 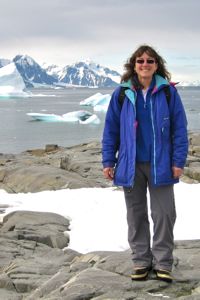 Conducting research in Antarctica has been a life-changing experience for many of Steinberg’s students. Former W&M undergraduate Domi Paxton writes, “I underwent the most transformative experience of my undergraduate career and left with an unequivocal drive to pursue advanced research. Being immersed in the unique research environment of Palmer Station reinforced my ability to formulate scientific questions, gave me the opportunity to collaborate with a diverse group of scientists, and taught me how to communicate science to the public.”

Communicating science to the public is a key aspect of Steinberg’s educational activities. Professor Oscar Schofield, a colleague who chairs the Department of Marine and Coastal Sciences at Rutgers University, says “Debbie’s work has provided a unique platform to engage the public in science discourse. She’s an important voice to the general public about how a shifting climate will alter marine ecosystems.”

In her 2013 Tack Faculty Lecture, Steinberg engaged 400 members of the local community in a discussion of plankton and deep-sea ecology, emphasizing the relevance of these fields to fisheries management and climate-change projections. Steinberg and her research group also participate in a wide variety of outreach programs at VIMS, including the institute’s annual Marine Science Day open house, weekly public tours and “Science Under Sail” cruises with Yorktown Sailing Charters.

Steinberg is widely recognized for her service to Virginia, the nation, and the international community. She has advised the Commonwealth through her work with the Chesapeake Bay Program Scientific and Technical Advisory Committee, serves on the governing council of The Oceanography Society, is a member of the Board of Trustees of the Bermuda Institute of Ocean Sciences, and was recently named as chair-elect of the University-National Laboratory System, which helps the federal government coordinate the nation’s oceanographic research fleet.

To date, Steinberg has authored or co-authored 83 articles in peer-reviewed journals, including 2 papers in Science, America’s leading scientific journal. She has earned more than $6 million in competitive research grants from the National Science Foundation and NOAA since 1997, and during her 25-year research career has spent a cumulative 1.5 years at sea on more than 50 research cruises.

She is the recipient of the American Geophysical Union’s prestigious Sverdrup Award lecture, in 2012; a Plumeri Award for Faculty Excellence from W&M in 2014; and the Dean’s Prize for Advancement of Women in Marine Science from VIMS in 2006.

Steinberg joins six other VIMS faculty in winning the SCHEV award. Including this year's awardees, 38 W&M professors have received the honor since the awards' inception in 1987, more than any other university in the Commonwealth.

This year marks the 29th anniversary of the statewide program. The 13 recipients were selected from a pool of 88 applications based on accomplishments that strongly reflect the missions of their respective institutions.

Speaking of this year's award winners, SCHEV Director Peter Blake says “the annual recognition of Virginia’s outstanding faculty members is truly one of the agency’s most rewarding activities. We are honored to highlight the accomplishments of these professors who lend their extraordinary talents to their students, their institutions, and the Commonwealth of Virginia.”

Hunter A. Applewhite, president of the Dominion Foundation, says “This is the 11th year Dominion has sponsored the Outstanding Faculty Awards. When you read the nomination packets of these recipients, you are struck by their passion for their subjects and their devotion to sharing it with their students.”

The OFA program is administered by SCHEV and funded by a grant from the Dominion Foundation. Since the first awards ceremony in 1987, 341 Virginia faculty members—including the 2015 recipients—have received this high honor.

SCHEV is the Commonwealth’s coordinating body for Virginia’s system of higher education. The agency provides policy guidance and budget recommendations to the Governor and General Assembly, and is a resource for information on higher education issues for Virginia colleges and universities.